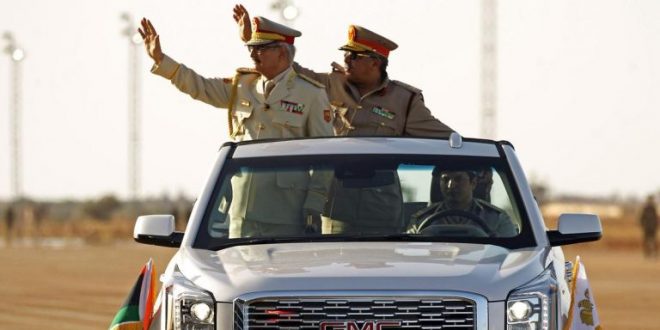 Forces affiliated with Libyan commander Khalifa Haftar engaged in violent clashes with Islamic fighters around the city of Derna in eastern Libya on Tuesday. Moreover, two soldiers were killed in a car bomb and another soldier was kidnapped at a checkpoint in the region.

Milad Al-Zawi, spokesperson of the special forces of the Libyan National Army (LNA) led by Haftar, said that the fight in southwest Derna was the most intense since the beginning of the LNA campaign to take control of the city. He added that one commander was killed while two soldiers were wounded.

Derna is under the control of Islamist militants known as the the Shura Council of Mujahideen. Early in May, Haftar announced that he will liberate the city from the Islamist fighters.

Furthermore, the Islamic State group attacked a checkpoint in eastern Libya using a car bomb, killing at least two security personnel. Haftar’s forces launched several raids on the city with the help of the air forces of regional allies.

Violence has raged in Libya since 2011, when a popular uprising ended with the ousting and subsequent killing of former president Muammar Gaddafi. Since the ousting of Gaddafi, rival governments and parliaments have been competing in the west and east of the country.