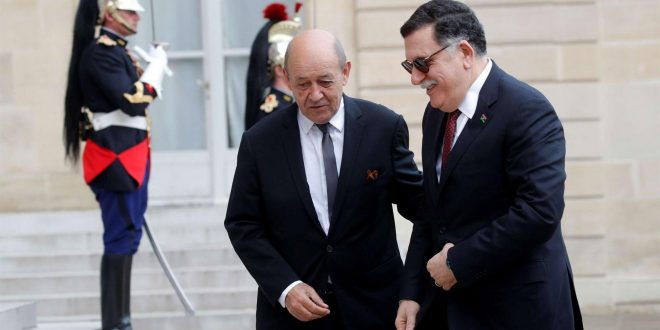 Rival Libyan leaders vying for influence in the fractured and war-scarred country meet in Paris on Tuesday for a major peace conference seen as a risky French-backed push for a political settlement in the country.

Many analysts are sceptical that the initiative to invite four senior figures representing Libya’s factions, as well as neighbouring countries and regional powers, can lead to significant progress.

Years of mediation by the United Nations, as well as former colonial power Italy, have failed to bring stability to the north African nation which descended into chaos after the ousting of dictator Moamer Kadhafi in 2011.

The main focus of the meeting will be on trying to agree a political roadmap committing all parties to hold parliamentary and presidential elections before the end of the year — an approach not favoured by everyone.

“I believe that elections are a big risk in a country armed like Libya,” Federica Saini Fasanotti, an analyst with the Washington-based Brookings Institution, said.

There are also disagreements over whether a vote on a new constitution, or elections for the presidency and parliament, should come first.

“While the Italians, Turkish, Qataris and to a large extent the Americans believe the constitution comes before elections, on the other side, the French, Egyptians and Emiratis want elections first,” Mohamed Eljarh, from the Libya Outlook consulting firm said.

Also, despite French efforts to convene all of the leading players in the oil-rich country, militias in and around the city of Misrata have boycotted proceedings, leaving western Libya under-represented at the talks.

Aguila Saleh Issa, the parliament speaker based in the eastern town of Tobruk who opposes the UN-backed administration, is also expected, as is Khalid Al-Mishri, the newly elected head of the High Council of State.

Representatives from around 20 countries involved in the Libya crisis have been invited — an acknowledgement that the problems can only be resolved if regional powers agree on a common roadmap.

These include Egypt, Russia and the United Arab Emirates which have backed Haftar and the rival administration in Tobruk in the east, not the UN-recognised government based in the capital Tripoli.

Qatar, Kuwait, Saudi Arabia and Turkey, as well as neighbours Algeria and Tunisia and west African leaders from Niger and Congo will also attend, the French presidency has announced.

European leaders see stabilising Libya as key to tackling jihadist threats and migration from the country which has become a departure point for hundreds of thousands of Africans trying to reach Europe.

Macron threw himself into finding a solution shortly after his election in May last year.

The 40-year-old French leader brought Sarraj and Haftar together in Paris in July where they agreed a ceasefire and to hold elections in 2018 — a move that irked the Italian government at the time which was blindsided by Macron’s diplomacy.

The task of stabilising Libya is complicated by diverging interests among Middle Eastern countries, which have sometimes backed opposing sides in the fighting, as well as competition between European powers.

Macron is suspected by some in Italy of organising the conference at a time when France’s southern European neighbour, which has major oil interests in Libya, is facing a serious political crisis.

“It’s as if Macron wanted to make the most of the this moment of absence by Italy on the Libyan dossier,” Italian newspaper La Repubblica wrote last week, citing diplomatic sources.

France is also suspected by some rivals within Libya of favouring Haftar, a military strongman who has fought Islamist militias and who was recently treated in Paris for an undisclosed ailment.

“There is clear apprehension among many in western Libya that the French initiative is an attempt to reinforce the position of Khalifa Haftar as the key power broker in Libya,” Eljarh from Libya Outlook added.

The Crisis Group, an NGO that studies conflict zones, also voiced caution about the French conference.

“Much more work remains to be done for a peace-building effort in Libya to succeed,” it said on Monday. “For this reason, Crisis Group believes that France should not request that its four Libyan guests sign an accord.”