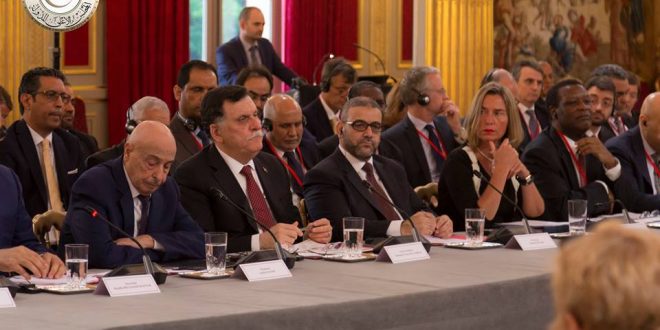 The Head of the High Council of State (HCS) Khalid Al-Mishri, said a ceasefire must take effect in Derna, in eastern Libya, pointing out to the Libyan Political Agreement (LPA) which says no to any military conflicts across Libya and advocates for reconciliation.

“Derna is suffering from a siege on civilian population that reached over 2 years leading to acute shortages of all basic needs such as foods, medicines and others, thus leaving the civilians to their own fate struggling with the deteriorated humanitarian conditions.” Al-Mishri explained in an interview with France24 in Paris on Tuesday, calling for an immediate ceasefire in the city.

Al-Mishri told Paris meeting on Tuesday that southern Libya, especially Sabha, is going through certain hostilities and “foreign parties” are involved in it, hence leading to deteriorated humanitarian conditions as well in the southern region, according to the HCS official Facebook page.

“Unity of Libya, sovereignty, civilian authority in the country, no military solution, the basis of solutions is the LPA, peaceful circulation of power, alleviating economic burdens on Libyans, fighting terrorism and extremism, and uniting Libyan institutions are the main points I stressed in Paris conference.” Al-Mishri told France24.

Al-Mishri also indicated that the HCS doesn’t recognize Khalifa Haftar – the commander of the self-styled army in east Libya – as he is not legitimate but merely a commander of a formation of military forces.

“I don’t recognize a chief commander named Haftar; I recognize the commander in chief Fayez Al-Sirraj as per the LPA.” He remarked, adding that he didn’t talk nor shake hands with Haftar during Paris meeting.

“We are ready to work with the House of Representatives as per LPA Article 15 and we back up holding elections in the country to end transitional phase but there should be a referendum on the constitution before that.” He elaborated.

France hosted Al-Mishri in addition to the HoR Speaker, Aqilah Saleh, the Head of the Presidential Council Fayez Al-Sirrja and the commander of the self-styled army Khalifa Haftar and brokered a declaration of principles where all parties agreed on holding elections by December 10, 2018 upon a constitutional basis that should be defined by September 16.