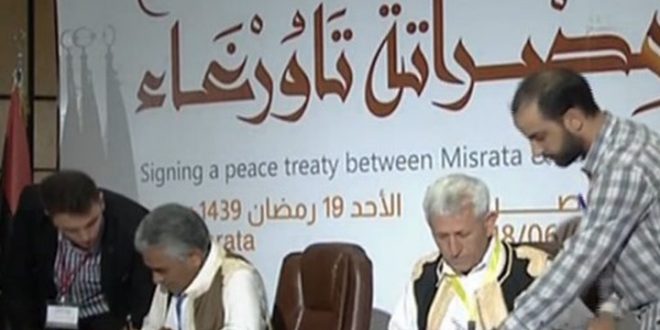 After seven years of dispute, Misrata and Tawergha signed an agreement of peaceful coexistence and reconciliation that allows displaced Tawerghans to return to their city, from which they were driven out in 2011.

“Misrata told us that Tawergha IDPs can start returning to their city. No specific timing but we are looking into security measures for the safe comeback of the families. It’s going to be very soon.” Tawergha Local Council Head Abdelrahman Al-Shakshak said.

“This agreement is the basis for resolving all conflicts between the cities so that a comprehensive can be reached across the whole country. This agreement is to black any kind of attempts to use the dispute for political and partisan gains.” Misrata municipality said in a statement.

Libya’s Mufti hailed the singing on Sunday, calling on both cities to take the side of the country’s wellbeing at all times and hold onto reconciliation principles, adding that all Libyans should now push for reconciliation based on justice and fair agreements.

The Head of the Presidential Council Fayez Al-Sirraj also welcomed the peace deal and hoped all IDPs would return soon to their city, calling on all Libyans to forget the past and look forward to the future of Libya, saying the only solution for Libya crisis is reconciliation and tolerance.

Likewise, the Head of the General National Congress Nuri Abu Sahmain also welcomed the “national achievement for February revolution,” calling on all Libyans to exert efforts toward a comprehensive reconciliation.

The High Council of State also praised the agreement between the two cities saying only reconciliation can build the state of Libya.

Internationally, the Italian Embassy in Libya tweeted support for the Tawergh-Misrata agreement saying it’s time to leave out conflicts and replace them with national reconciliation across the country.

Meanwhile, the House of Representatives and Khalifa Haftar’s loyalists did not comment on the peace deal, knowing that some MPs personally weighed in on the agreement with different opinions; some saying it was a good step for comprehensive reconciliation and others saying it was unfair to Tawergha people.