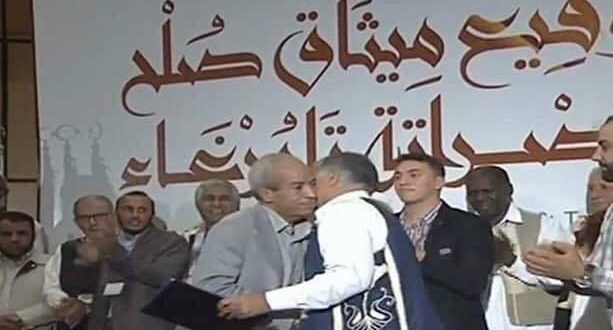 The Libyan cities of Misurata and Tawergha have signed a historic reconciliation charter that will oversee the return of the stranded Tawerghan IDPs return to their city after over seven years of displacement.

Misurata hosted on Sunday the singing of the charter of reconciliation in the presence of elders from both cities, government officials and dignitaries from across the country.

The charter will allow the IDPs who live in different cities in Libya, mainly in makeshift camps in Tripoli, Garaet Al-Gataye near Bani Walid, and elsewhere, to gradually return to their houses in their city.

It also tasks the central military zone of the government to secure the city and the return of the IDPs.

Both cities agreed to combat any media campaigns that aim at invoking any new conflicts between them.