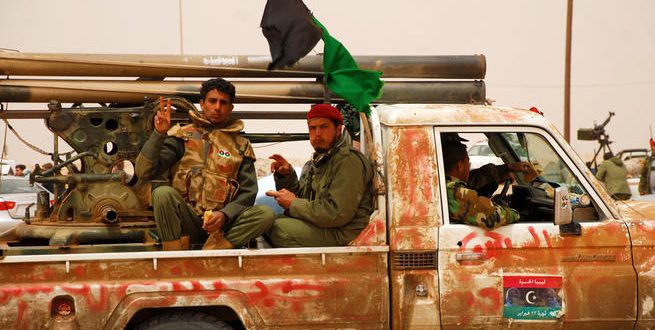 The sources said the LNA will question bin Qamou at the headquarters of Commander Khalifa Haftar in Rajmeh, which lies outside the eastern city of Benghazi.

Bin Qamou, a high-ranking al-Qaeda official, had worked as a driver for bin Laden in Sudan and has been involved in several terrorist attacks and confrontations with the LNA.

Also Sunday, LNA spokesman Ahmed al-Mesmari said fighter jets carried out strikes on bases and gatherings for terrorist groups in the area of operations between Ras Lanuf and the outskirts of the city of Sirte.

Meanwhile, Ibrahim Jadhran, the head of militias that have attacked Libya’s oil crescent, claimed that the key oil port terminals remained functional under the legitimacy of the Government of National Accord led by Fayez al-Sarraj, and the National Oil Corporation.

In a televised address, Jadhran reiterated his accusations against the LNA and Haftar of backing “terrorism.”

He again called on the international community and the Libyan tribes in the eastern coastal region on forming a committee and visit the oil crescent area to corroborate his claims.

But GNA’s finance minister, Osama Hammad, made sure to distance Sarraj’s government from Jadhran’s claims, saying the oil crescent region had come under a terrorist attack that targeted the Libyan people’s resources and their only source of income.

The NOC said storage tank 12 in Ras Lanuf had been “significantly damaged” in fighting on Thursday, when Jathran’s forces stormed it in addition to the oil port of Es Sidr.

It announced an initial production loss of 240,000 barrels per day (bpd), which it said was expected to rise to 400,000 bpd if the ports stayed shut.

“Further damage to these sites could have a huge impact on the Libyan oil sector and the national economy,” the NOC warned.