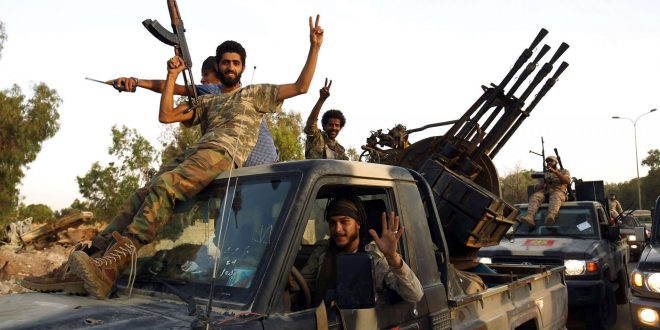 Four members of east Libyan security forces were killed in the city of Derna on Wednesday by a suicide bomber bearing a white flag as he drove towards a group of soldiers, a military spokesman said.

Ahmed al-Mismari, a spokesman for Khalifa Haftar’s Libyan National Army (LNA), said the bomber detonated explosives packed into the white Chevrolet when he got close, having approached the troops in central Derna asking to leave the combat zone.

The LNA is fighting to take Derna, the last city in eastern Libya outside its control, after launching a ground offensive against a coalition of local forces and Islamist militants last month.

Clashes continued in central Derna on Wednesday around the neighbourhood of Al-Maghar, where the LNA’s opponents were holed up, residents said.

“The main battle is finished and we are fighting pockets (of resistance) in an area of one square kilometre,” Mismari told TV station Libyas Channel.

Residents said water supplies and cooking gas had been restored in areas that the LNA has taken. Water, power, food and medical supplies had been largely cut off as the LNA offensive got under way.

The United Nations has repeatedly warned about the impact of the fighting on Derna’s population of around 125,000.

“The United States believes these vital Libyan resources must remain under the exclusive control of the National Oil Corporation and the sole oversight of the Government of National Accord,” the statement said.