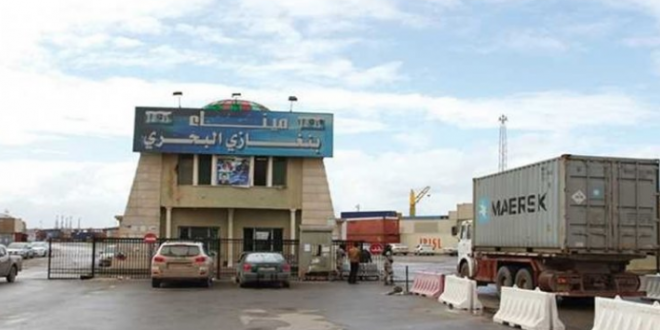 Saiqa Force has taken control of Benghazi’s port and stationed in several points in its vicinity, according to sources from the city.

The sources revealed that the forces securing the port withdrew from their posts after receiving information of an impending attack on the port, which made it easy for Saiqa Force to take over the harbour.

The city of Benghazi has witnessed in the past few days intensive movements of the Saiqa Force in protest against the issuance of an arrest warrant by Khalifa Haftar for the frontlines commander of Saiqa Force Mahmoud Al-Werfalli.

Khalifa Haftar gave orders to arrest Mahmoud Al-Werfalli, who is sought by the International Criminal Court, after escaping from a military prison and storming the headquarters of the Military Investment Authority of Haftar.

Al-Werfalli stormed the headquarters of the Military Investment Authority of the so-called General Command of the Dignity Operation in Hadayiq area in Benghazi and seized documents and property from the building after disagreements arose between him and head of the of the authority Al-Madani Al-Fakhri.

On a leaked walkie-talkie call posted on social media earlier, Al-Werfalli accused Al-Fakhri of theft and embezzlement, describing him as an embezzler of public money.

He talked about the disappearance of large sums of money, demanding the money to be returned and distributed to the “families of the martyrs,” as he put it.

Al-Werfalli insisted that he will go after Fakhri until “the end of the days” or until he knows who’s behind him, asking him to reach out to the “supreme authorities” to reveal the fate of the hidden funds.

Al-Werfalli made a cinematic escape from prison and arrived in Benghazi last week.

The International Criminal Court issued a second arrest warrant for al-Werfalli for war crimes against civilians in the city of Benghazi and its surroundings.

This is only an excerpt. You can read the full article on libyaobserver