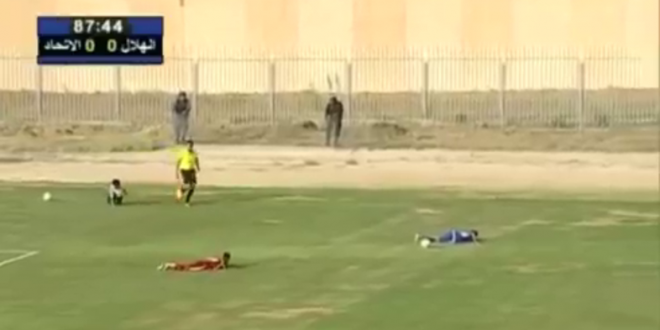 A video is slowly gaining traction on social media showing the final minutes of the Libya Cup final when players from al-Ittihad and al-Helal were seen ducking as sounds of several gunshots are heard nearby.

The incident took place during the 87th minute of the final game held at al-Khums Stadium on Monday with the scores level at 0-0.

Players from both sides quickly left the pitch but returned to finish the game with extra time during which al-Ittihad scored two goals.

A third goal was scored toward the end but was not counted in the final score as al-Helal players stopped playing and walked off in protest against the refereeing.

Al-Ittihad Football Club qualified for the Libyan Cup final last week after the withdrawal of their rivals al-Ahli Tripoli before their scheduled semi-final match on Sunday in Zawiya city.