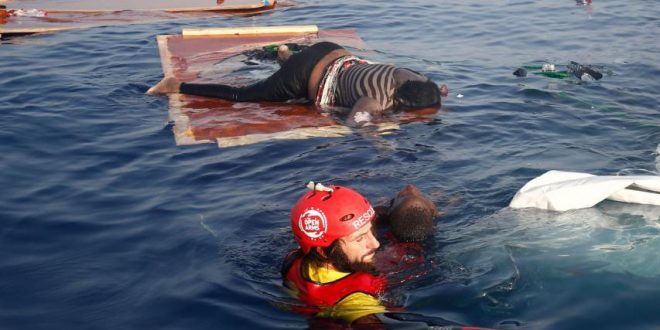 Proactiva Open Arms, which has been rescuing refugees crossing the Mediterranean Sea from North Africa to Europe, says the Libyan coastguard has left at least two refugees to die after abandoning them at sea.

The Spanish NGO, which carries out search and rescue operations in Mediterranean, posted a video and pictures on Twitter showing how their boat took on board three people; two women and a child.

By the time the three were found by Proactiva, one woman and the child had already died.

According to tweets by Oscar Camps, founder and director of Proactiva, the boat was damaged and abandoned by the Libyan coastguard.

“Today we’ve found the bodies of a woman and a small child, as well as a woman who was still alive among the wreck of a ship,” Camps said in a video.

“I want to condemn the lack of assistance in international waters and the merchant ship Triades which abandoned a boat in danger in the middle of the night,” he added.

“They don’t know how to manage an emergency situation they arrived two days late and abandoned two women and a child in the wreckage of a ship that they themselves destroyed,” Camps said.

The boat carrying the two bodies and one survivor were found about 120km off the Libyan coast.

“This is the direct consequence of contracting armed militias to make the rest of Europe believe that Libya is a state, a government and a safe country,” Camps said, referring to deals made between Libya and European countries in an attempt to stem the number of refugees trying to reach Europe.

Libya, one of the main departing points for refugees traveling from North Africa to Europe, has made deals with Europe.

Later, Camps blamed the death of the refugees on Italy and its new interior minister, Matteo Salvini.

“This is the direct consequence of not allowing the work of NGOs that save lives in the Mediterranean,” Camps said.

Since taking up his post in early June, Salvini has pushed the divisive issue of migration to the forefront of the EU agenda by refusing to open Italy’s ports to migrant rescue ships operating in the Mediterranean.

Last week, Salvini vowed to end arrivals by boat completely, saying the aim of the new policies was that “not one more person arrives by boat” on Italian shores.

He has accused the NGO ships of aiding human traffickers to bring migrants to Europe.

“Since we made our position known, in recent hours, there has not been a single ship of these so-called ‘humanitarian associations’ in Libyan waters,” Salvini said.

“Pregnant women, children and refugees will remain in Italy,” said the minister, who has promised to speed up deportations of undocumented immigrants.

“Protection is reserved for humanitarian cases,” he added.

Italy’s new, stricter polices have led to condemnation from several NGOs, but also from countries like Spain and France.