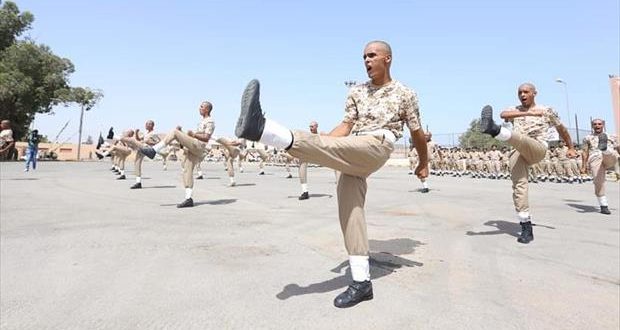 Libya’s Presidential Guard announced the graduation of its second batch of cadets on Sunday 15 July 2018 in Tripoli. It did not state how many had graduated.

The Presidential Guard said that the graduates had received training for four months in military and combat arts, military laws, human rights principles, preaching and religious counselling programmes and lectures in human development.

After the ceremony, military and sports parades, the graduates gave their legal pledge and their determination to serve their country and maintain its security and territorial integrity, their loyalty to Allah and thus to the nation, the Presidential Guard reported.

The first batch of Presidential Guard cadets had graduated in August 2017. Their numbers were not confirmed at the time either.

The formation of the Presidential Guard was announced by the Faiez Serraj-led Presidency Council in May 2016, but it has been slow in its creation. It is meant to takeover the securing of state institutions such as the Central Bank of Libya, airports, ministries and the Prime Minister’s office. The aim is to reduce and eventually eliminate the reliance on militias – in order to strengthen the Presidency Council and its designated Government of National Accord – giving it independence from militia coercion.

The Presidential Guard is the attempt by the internationally recognized Presidency Council based in Tripoli to form a unified Libyan national army loyal to, and under the control of. the legitimate civilian government of the time. On the other hand, the Libyan National Army, based overwhelmingly in the east of Libya, is under the command of Khalifa Hafter and is recognized by the Tobruk-based House of Representatives.

It will be recalled that the Presidential Guard had offered in April to provide security for Korean companies wishing to return to Libya to resume their stalled projects.