Libyan and Tunisian officials were unable to come to an agreement to reopen the key Ras Ajdir border crossing on Wednesday in a meeting which came after more than 10 days of closure.

“We don’t know how long it will take to solve,” a Libyan official told Middle East Eye, speaking on condition of anonymity.

“Nothing is clear, it could be another week to 10 days before we come to an agreement,” he said, adding that the Tunisian delegation had come to the meeting with a lot of conditions.

Ras Ajdir, a critical border crossing between Tunisia and Libya, where everything from tinned tomatoes to fuel passes back and forth daily, was closed to traffic on July 10 after attacks on Libyan travellers in the Tunisian border town of Ben Gardane intensified. 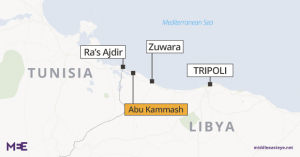 Tunisian smugglers closed the roads between Ras Ajdir and the rest of Tunisia in protest against restrictions imposed by Libyan authorities earlier this month to prevent smuggling of fuel and subsidised goods from Libya.

Whilst the crossing reopened briefly, it was closed again by the local Libyan authorities on July 15 following further attacks on travellers. The Tunisian side is also closed to people trying to enter Libya.

The area has seen repeated clashes over the course of the war as various forces have attempted to take control of the crossing, as well as the western city of Zuwara’s port.

“Libyan cars are being hit with bricks, sticks, anything they have,” Mohamed Mohamed, a Libyan security worker, told MEE.

“They aren’t even letting ambulances pass,” he added, referring to the protesters.

Tunisia’s informal economy has steadily expanded in recent years as formal employment opportunities for the country’s growing young population have dwindled. It produces more than a third of Tunisia’s GDP and is the primary employer of young Tunisians.

Informal jobs are disproportionately prominent in the southern and interior regions and take a wide variety of forms – including people selling on the side of roads or in weekly markets and smuggling goods across the borders with Libya and Algeria.