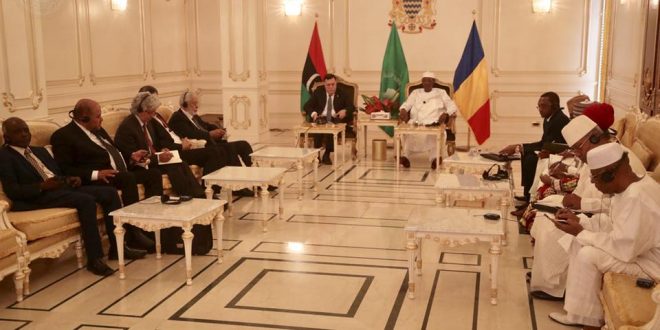 The Head of the Presidential Council Fayez Al-Sirraj arrived on Wednesday in Chad and discussed with the President Idriss Déby issues of mutual interests and stability as well as security in Libya.

According to the media office of the Presidential Council, Al-Sirraj and Déby agreed to cooperate in border security to thwart terrorist acts and smuggling operations as well as human trafficking.

Libya and Chad also agreed to coordinate between the security apparatuses of the two countries, vowing to activate the security protocol that was signed last April in Niger by Libya, Chad, Niger and Sudan in order to cooperate in joint border security.

The two officials also agreed to have a similar meeting in Sudan next August to review developments and security as per of a new joint cooperation.

According to the media office, a joint statement was issued at the end of the meeting where Déby accepted Al-Sirraj’s invitation to visit Tripoli on a date to be announced later.