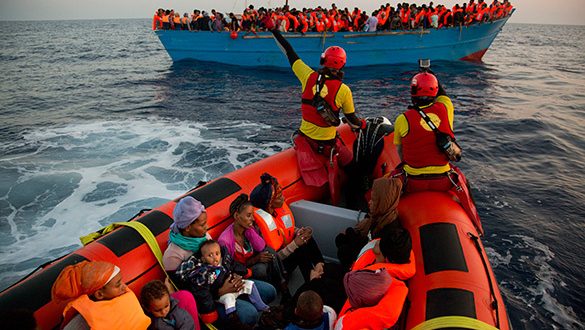 At least 1,500 migrants have died this year attempting to reach Europe by crossing the Mediterranean, with the Libya to Italy route the deadliest, according to a new report.
One in 19 migrants who make the perilous Libya-Italy sea journey have died this year, the UN’s International Organization for Migration (IOM) said on Friday.The UN agency also said that 2018 marks the fifth straight year that at least 1,500 migrants have died crossing the Mediterranean.

Spain has this year overtaken Italy as the preferred destination, with nearly 21,000 migrants choosing that route. In total about 55,000 migrants have reached Europe, fewer than half at this time last year.

Italy’s new far-right government has closed its ports to rescue vessels operated by international charities, sparking widespread criticism. It also struck a “friendship pact” with Libya that reactivates a 2008 agreement to allow migrants to be sent back to Libya in exchange for foreign investment.

“It’s important to note two things: one is that despite incredibly low numbers arriving to Italy, the per capita death, or the rate of death per 1,000 people, may be at its highest point since the emergency began,” IOM spokesman Joel Millman told reporters in Geneva.

Millman said that African migrants “seem to be choosing Spain as their route now”, which carries a death rate of one in 70 crossings.

Last month, European leaders struck a deal in Brussels to consider setting up asylum processing centres outside the bloc, most likely in North Africa, in a bid to discourage migrants and refugees boarding EU-bound smuggler boats.

The EU also struck a deal with Ankara in March 2016 aiming to cut off the sea crossing from Turkey to the Greek islands that enabled 850,000 people to travel into Europe.

The EU reached a separate controversial agreement with chaos-wracked Libya in 2017 to stem the flow of migrants from that country, where torture in militia-run migrant detention centres is endemic.

Rights groups have sharply criticised the various EU and member state deals to raise physical and intangible walls around Europe to keep out the most vulnerable and desperate. 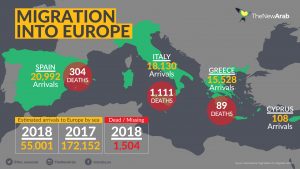