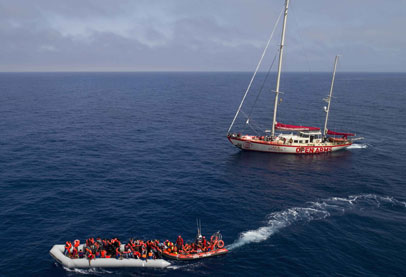 Italian ministers deflected responsibility Tuesday for the return to Libya of 108 migrants rescued in the Mediterranean, after humanitarian groups made accusations of international law violations.

Both Interior Minister Matteo Salvini and Transport Minister Danilo Toninelli insisted that the rescue carried out by the Italian-flagged Asso Ventotto supply ship was coordinated by the Libyan coast guard without involvement of its Italian counterpart.

Their statements came after the UN Refugee Agency and Amnesty International denounced the decision to take the migrants to Libya.

The UN High Commissioner for Refugees in Italy tweeted that Libya is not a secure port, making such a transfer a violation of international law.

Amnesty Italia said “not only is it a violation of the right of asylum, but it is an inhumane act toward those 108 people”.

Nicola Fratoianni, an Italian lawmaker aboard a Spanish-run NGO rescue ship, wrote on Facebook that they had proof that the Asso Ventotto was taking the migrants to Libya, calling it “a very serious precedent” if ordered by the Italian coast guard.

The new hard-line, anti-migrant Italian government has kept rescue ships run by humanitarian groups from bringing rescued migrants to the country’s ports since taking power in May.

In addition, it’s also planning to furnish the Libyan coast guard with 12 additional patrol boats in an effort to prevent smugglers’ boats from reaching international waters.

The Italian government insists the step is necessary to stop human trafficking, however much of the country abhors what it considers racist policies on immigration.

In Brussels, European Commission spokeswoman Natasha Bertaud deferred questions about the rescue, but said that Libya does not meet the necessary conditions to be considered a safe port, a position “consistently maintained” by the commission.