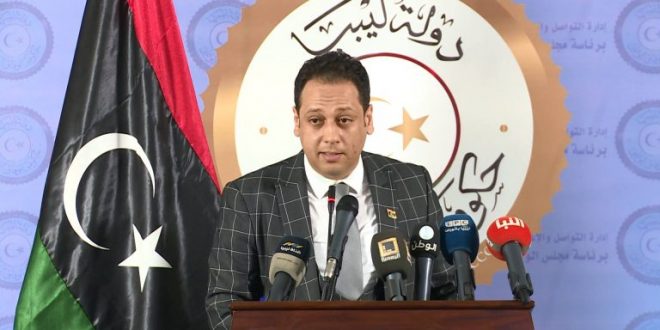 The course and date of Libya’s planned elections were a matter to be decided by Libyans alone, Faiez Serraj, head of the Presidential Council, was quoted as saying by his personal spokesperson Mohamed El Sallak.

El-Sallak was speaking at yesterday’s weekly press conference held at the media centre of the Prime Minister’s office in Tripoli. Sallak went on to convey the emphasis by Serraj and the whole Presidential Council on the responsibility of all Libyan parties concerned with Libya’s elections, and in particular those that had made a commitment to the Paris agreement. Sallak said Serraj requested that the concerned Paris participants abide by their (constitutional) obligations.

Answering follow up questions on the issue, Sallak reiterated and confirmed that Libya welcomes any positive and constructive role by the international community that participates in pushing in the direction of solving the Libyan crisis and assured the importance of the unification and coordination of the Libya efforts of the international community.

He stressed that only the Libyans that were party to the Paris agreement have the will and ability to decide the time of Libya’s elections, adding that no one can stop this process if the Libyan (Paris) parties have the real will (to hold elections).

Sallak added that the parties at Paris alone hold the tools and processes to activate the agreement leading to elections.

Libya will not accept any interference from any state in issues that are of purely Libyan concern – matters that are only for Libyans to decide through their free will, concluded Sallak.

Sallak was referring to the heated debate taking place in Libya over perceived comments by Italy’s ambassador to Tripoli, Giuseppe Perrone during a local television interview.

Perrone went on to clarify his comments that Italy was committed to supporting Libya in creating the necessary conditions to hold elections as soon as possible. Adding that a solid constitutional reference is a key condition to making sure that elections help reconciliation and stability.

However, some Libyans interpreted these comments as an attempt to interfere in Libyan affairs and felt it was up to Libyans to decide when the ‘‘necessary conditions’’ for holding elections were right.

The comments by Perrone were also seen in contrast to the perceived desire of France, deemed to be pushing for elections by December this year.