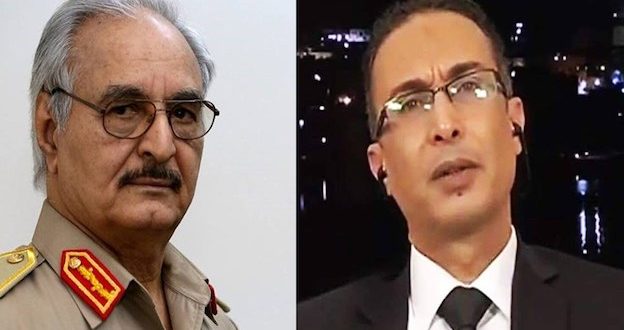 The member of the House of Representatives (HoR), Jalal Al-Shwehdi, had accused the commander of the Dignity Operation, General Khalifa Haftar, of aborting the Political Agreement and breaking the Paris declaration.

Al-Shwehdi said, on his FaceBook account, that Haftar hadn’t worked on creating any healthy conditions to guarantee the freedom for the expected general elections in the eastern side of Libya where the kidnapping operations are continued primarily in the cities of Benghazi and Derna as well as in the Petroleum Crescent Region.

Al-Shwehdi commented that there is no army built on any institutional basis, describing what so-called army as some security militias that abort any outputs that Haftar doesn’t agree with.

It is essential to mention that Al-Shwehdi had published his comments on the statements of Haftar in his latest press meeting.

Al-Shwehdi stated that Haftar said that his army hadn’t intervened in the political operation either through the HoR or the Interim Government that led by Abdulla Al-Thinni. Al-Shwehdi commented on this statement by saying that everyone knows that Haftar’s forces had intervened in Al-Thinni’s government. He added that in September 2015 Haftar’s forces got Al-Thinni off the plane by force while he was ready to travel to attend a conference in Malta.

The other evidence of Haftar’s forces intervention in the political works was witnessed when Haftar’s air forces threatened to bombard the HoR and the government HQs if they do not obey Haftar’s general command.

Al-Shwehdi stated that Haftar’s intervention had gone beyond these lines, Haftar intervened even in the Constitution Drafting Assembly (CDA) and the constitution draft itself. Moreover, Haftar also disturbed some members of the CDA.

Al-Shwehdi said that Haftar stated, once in a statement, that there are specialists in law, economic, social, and judicial affairs communicated with his army and they would provide their opinions on the constitution draft.

Regarding the Paris declaration, Al-Shwehdi said that Haftar’s meeting with the French Foreign Minister was another intervention in the politics.

Al-Shwehdi highlighted what Haftar said in the interview about the coming 10th of December. Haftar noted that “we are getting closer to the date 10 December, and the factions should prepare for the elections.” Al-Shwehdi commented on this statement by telling Haftar that he was the first one who broke the Paris declaration when he handed over the authority of the oil ports to the Interim Government which is not recognised internationally. Al-Shwehdi added that the International Community advised Haftar to correct this big mistake; otherwise, the problem would continue.

Al-Shwehdi raised a question asking Haftar about what he had done to prepare for the elections in the current situation in the eastern side of Libya especially Benghazi, Derna, and the petroleum crescent region where his militias kidnap and arrest with no any legal document and without even informing the families of the victims.

Al-Shwehdi also asked Haftar about the displaced from Benghazi, Derna, Ajdabeya, and other cities. And asked him about the properties and houses of the displaced.

Haftar said that many politicians who are fighting each other want to see the continuity of the current scene to remain in power. But Haftar had forgotten that he is one of the sides of the dispute.