Home / Normal / The abandoned children of Daesh fighters in Libya 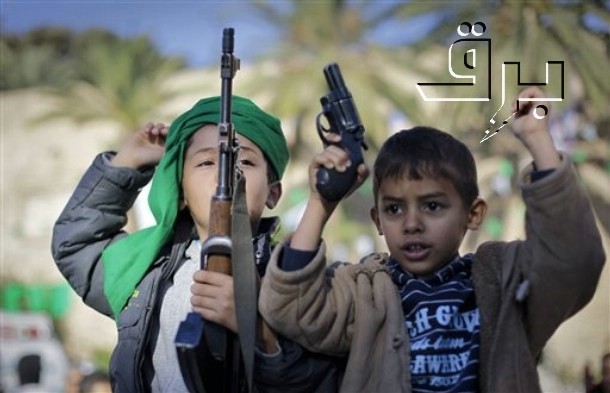 The children of an army soldier hold his guns in the air as pro-Gadhafi soldiers and supporters gather to celebrate in Green Square, Tripoli, Libya Sunday, March 6, 2011. Thousands of Moammar Gadhafi's supporters poured into the streets of Tripoli on Sunday morning, waving flags and firing their guns in the air in the Libyan leader's main stronghold, claiming overnight military successes. (AP Photo/Ben Curtis)

The abandoned children of Daesh fighters in Libya

At the height of its strength in Libya, Daesh controlled the coastal city of Sirte, about 500 kilometres east of Tripoli, having amassed a sizeable force thanks to hundreds of foreign fighters, most of whom came from Libya’s neighbours such as Egypt, Tunisia, Sudan, Algeria and even Chad and Niger in the south.

When Libya’s Government of National Accord (GNA) declared victory over the terror group on 6 December, 2016 in taking control of Sirte, most of those fighters had been killed or captured, or simply melted away into the desert and mountainous areas where it is easy to hide. However, the jihadist men and women, some of whom were married, left behind dozens of children now cared for by Libya’s Red Crescent (LRC); other youngsters are in jail.

On 16 July, BBC World News broadcast video footage showing a group of children being cared for by the LRC in Misrata, west of Sirte. The children, some as young as four, are mostly Egyptians. The journalist traced two of the children’s grandparents back in Egypt and showed them the video of their grandchildren. In tears, they confirmed the identity of the children, and expressed their hope in getting them back safely. Both children were born in Egypt and were taken to Libya with their mother when their father joined Daesh.

Some children 10-years-old and over were trained by Daesh as fighters and many were captured. According to Ahmed Ben Salem, a spokesman for the Special Deterrent Forces (SDF), about 22 of them are in jail in Tripoli’s Maitiqa Prison, which is run by the SDF militia nominally under the control of the GNA. “Most of these children have two Tunisian parents each,” explained Ben Salem, “and there are 13 Tunisian mothers and one Senegalese.”

In March 2017, right after Daesh was ejected from Sirte, the GNA asked Egypt, Tunisia, Ghana, Senegal and Sudan to take home young children identified to be their nationals. In February this year, Sudan repatriated four children out of a total of seven identified as being Sudanese. The Tunisian authorities refused to accept any of around 40 children believed to have Tunisian parents being held in Misrata and Tripoli. The Tunisian government is also still refusing to take back the bodies of dead Daesh fighters identified as its citizens. According to Libya’s National Human Rights Committee rapporteur Ahmed Hamza, “There are about 700 corpses still in mortuaries in Misrata, most of which were identified as Tunisian nationals.” The authorities in Tunis are moving slowly on the subject, apparently because there is no clear policy on how to handle the situation.

Being close to Libya — no entry visa is required — Tunisians wishing to join Daesh in Sirte found it relatively easier to enter Libya than go to Syria or Iraq. They usually entered the country legally disguised as workers. Once there, they would have a contact person somewhere not far from the Tunisia-Libya border who would make arrangements for them to reach Sirte nearly 600 kilometres away. Sabratha, a coastal town around 70 kilometres from the Tunisian border, used to be a hub for potential Daesh recruits until the US bombed and destroyed what it called a Daesh training camp on 19 February, 2016; the local militia, nominally controlled by the GNA, chased the Daesh remnants out of town.

A Tunisian parliamentary committee investigating the case of Tunisian nationals — both men and women — who have been sent to conflict zones, estimates their numbers to be around 3,000 individuals of whom 60 per cent are in Syria and 40 per cent in Libya. However, these statistics are from July 2017, and the committee has not, so far, updated its findings let alone made any recommendations because it has been embroiled in political arguments amongst its members representing different political parties. Tunisia, like many other countries, boycotted Syria in 2011, which made it hard to collect information about its nationals fighting there. However, sensing the scale of the problem, Tunisia decided to reopen its consulate in Damascus in September 2015.

Accurate figures on the number of foreign fighters who were in Sirte are lacking, but it is estimated to be around 2,000. The US State Department’s report on terrorism estimated that 1,700 Daesh fighters were killed in the city, while it puts the total number of fighters, of all nationalities, at about 6,500. Those who fled Sirte have either dispersed into the desert or gone to other countries, particularly those in sub-Saharan Africa.

Returning former Daesh fighters and their children is a controversial issue in many countries. François Molins, France’s top counterterrorism prosecutor, estimated that 690 French nationals, including 295 women, are thought to have joined Daesh in Syria and Iraq. Among them, 28 minors were fighting for the terrorist group in Syria as of 2017, and some 398 French nationals have returned to France so far and are being investigated. Molins estimated that 400 children of French descent were either born into French jihadist families while in Syria and Iraq or were taken there by their parents. He did not give any figures as to how many such children have been taken back to France, and he does not have any specific policy on how to handle such cases. According to President Emmanuel Macron, the French authorities are working on a case by case basis.

Forming an international coalition to fight Daesh may have been easy, but the same coalition countries failed to ensure a common approach to deal with children left behind. Britain, for example, recently cancelled the nationality of two citizens who are in jail in Syria, while France has refused to repatriate a woman dubbed “Brittany Jihadist”. In the earlier campaign against Daesh in Syria and Iraq, France even announced that its forces were hunting down French jihadists without any legal process. Belgium and Germany also used the same policies toward their own citizens who fought alongside terror groups abroad, including Daesh and “Al-Qaeda in the Islamic Maghreb”.

In Libya’s case, it is unlikely that Tunisia will accept any of the children of its nationals who fought and died there; those of Egyptian parents are more likely to be repatriated. The process, though, is tedious and slow.

Regardless of what their parents did, the children of Daesh fighters are innocent, even if they fought for the terror group below the age of legal responsibility. They are victims of their parents, their governments and the international coalition that had no plans for them after it had killed their mothers and fathers.