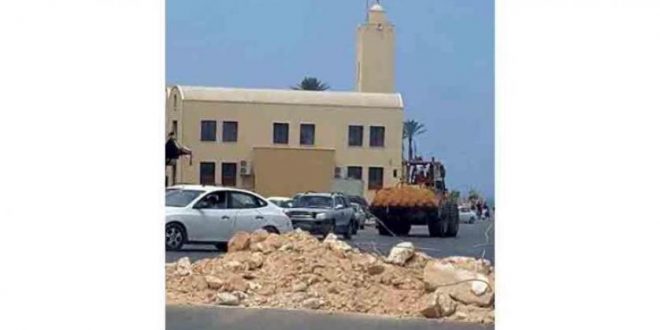 Blocked by upset protesters for a day, Al-Shaat Road in Tripoli will be reopened by Tripoli Central Security units, it announced Wednesday.

Meanwhile, an armed group from Souq Jumua in Tripoli closed the road Tuesday in protest of kidnappings of persons from their area on ID cards by Tajoura-based armed group.

Souq Jumua and Tajoura are two main areas in Libya’s capital and have been lately keeping a strictly tense relations.

The families of the detainees blamed the Presidential Council for the repercussions of the kidnap, saying in a statement that it had taken no action to resolve the issue, hailing at the same time the efforts exerted by Council of Elders in Souq Jumua and Tajoura in order to get this issue over with.

Several clashes took place lately between the two armed groups in and around Mitiga Airport over the detention issues.

Tajoura Council of Elders, which managed to end recent clashes, said earlier that it could not convince SDF to let the detainees go, saying it would have no responsibility for upcoming reactions.