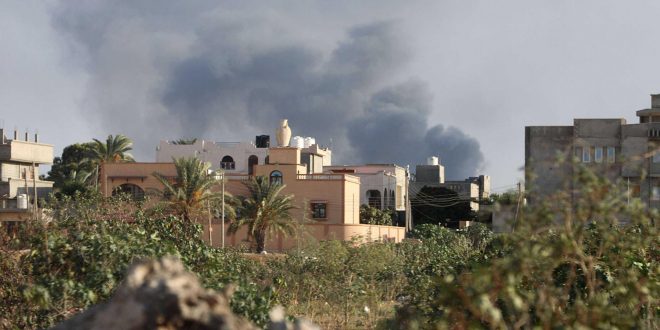 Fresh fighting erupted in the Libyan capital on Wednesday after the collapse of a truce, a witness and military source said, after the UN called for calm.

A military officer with forces loyal to the UN-backed Government of National Accord said there had been intermittent fighting in Tripoli’s southern suburbs.

“A combined force from the ministry of defence and (ministry of) interior of the GNA led an offensive against positions of the 7th Brigade,” he said.

The militia had been trying to advance along the road to Tripoli’s international airport which has largely been closed since fighting in 2014.

The 7th Brigade supposedly operates under the GNA’s defence ministry.

But on Monday Interior Minister Abdessalam Ashour said security forces were fighting the militia, which hails from the town of Tarhuna southeast of Tripoli.

Those clashes left at least five people dead and 33 wounded, according to a health ministry toll, before a truce was reached in the evening.

Fighting resumed on Wednesday in the Salaheddin neighbourhood of southern Tripoli, a resident said.

He reported machineguns and anti-aircraft guns being fired, which could be heard over the phone.

Overnight the UN Support Mission in Libya warned of attempts to “tamper with the security (of) Tripoli and its residents”.

“There is no justification for the bloodshed. UNSMIL calls on all to spare lives, stop military mobilisation and allow for mediation,” the mission wrote on Twitter.

The UN’s plea followed reports that forces from the city of Misrata, 200 kilometres (124 miles) east of Tripoli, intended to head to the capital.

Powerful armed groups from Misrata spearheaded the “Fajr Libya” coalition of militias which seized Tripoli in 2014.

The Libyan capital has been at the centre of a battle for influence between armed groups since dictator Moamer Kadhafi was ousted in 2011.