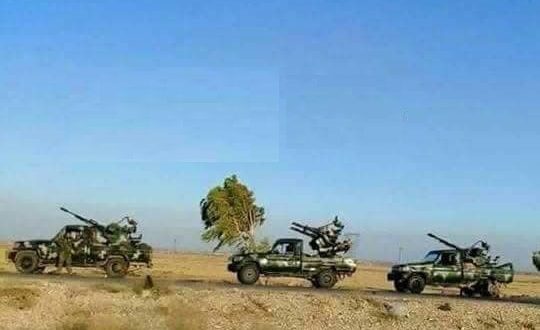 The quick early advances into the capital Tripoli achieved by Tarhuna’s 7th Infantry ‘‘Kaniat’’ Brigade (led by the Kani brothers) over the last week seem to have slowed down as fighting continued today.

A missile fell on the old Tawergha IDP camp in the Fellah area of Tripoli reportedly killing one person and injuring a number of others. Meanwhile, unknown militias forced open the Ruwaimi prison freeing a large number of prisoners believed to be in the hundreds. The Tarhuna militias have denied any responsibility for this action, as the blame game continues between the two camps.

There were realistic expectations that the Tarhuna forces could penetrate some central Tripoli areas such as their main announced target of Busleem overnight. However, their momentum seems to have been slowed down as the Tripoli militia alliance backed by some Misrata and Zintani brigades seem to have consolidated their positions and coordinated their operations.

Nevertheless, there were reports that at one stage the Tarhuna forces reached parts Furnaj, Ain Zara and the edge of Siahiya. Their proximity to Siahiya, a neighbourhood with a large Amazigh population, prompted the Amazigh Mobile Force to mobilize ready to defend their area. They have not joined in the fighting, however.

There were also reports that the Zintani forces, led by Emad Trabelsi, had returned to their former Tripoli barracks at the Islamic Call Society at Al-Jibs checkpoint. This was their old headquarters before they were forced to return to Zintan in the Libya Dawn militia war of 2014. The Trabelsi Zintani force is recognized and aligned with the Faiez Serraj Presidency Council. Serraj had invited them in as a ‘‘neutral force’’ to stop the fighting.

Meanwhile, the uncertainty and security vacuum has led to reports of some looting. Business owners in Kremia market and Busleem are emptying their premises. Again, its unclear who is responsible, but it is believed that criminals are also taking advantage of the chaos.

Mohamed al-Haddad, commander of the Central Military Zone, who disappeared believed to have been kidnapped in his own hometown of Misrata yesterday was found today, hurt but alive. He is in hospital.

Haddad was appointed by Serraj, in Serraj’s role as Supreme Commander of the (Tripoli-based) National Army, (together with Osama Juwaili, Western Military Zone Commander) jointly in charge of overseeing the ceasefire using ‘‘neutral’’ forces.

The National Oil Corporations’ Brega Marketing Company announced that it had brought under control the leaking fuel tank at Tripoli Airport Road fuel storage depot which was hit by a projectile yesterday. The leaking fuel tank failed to catch fire. It was feared that they would explode yesterday as many nearby residents were urged to leave their homes.

On the political front, the UN Secretary General condemned the escalation of violence whilst the UN warned about increased civilian casualties. Faiez Serraj, who it was feared had fled the country or had left for the China conference, made an ‘‘appearance’’ today. He announced a state of emergency and was reported to have held a number of meetings.

He announced that a security committee was formed to take all necessary steps to safeguard citizens and state institutions.