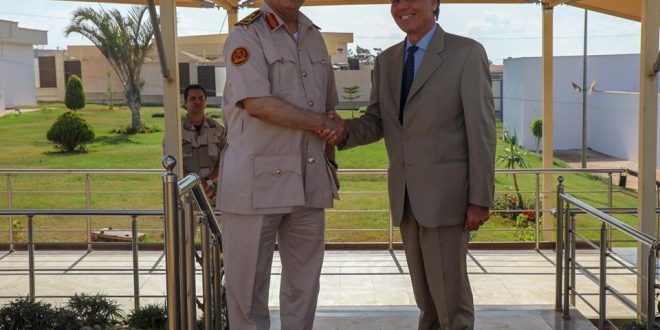 The commander of the Libyan self-styled army Khalifa Haftar asked the Italian Foreign Minister Enzo Milanesi, when the two met near Benghazi earlier this week, to change the current ambassador in Libya, Giuseppe Perrone, after discussions with French intelligence, a source close to Haftar told Libyan Express.
The source – an MP in Tobruk – said the request was last Monday in the meeting the two men held in Rajma, where Haftar insisted Perrone must go so his relations with Italy can become more close.
“Haftar is upset with the current ambassador in Tripoli as his stances are to him are in the best interests of Libyan Political Agreement signed in 2015 in Skhirat.” The source remarked.
Haftar also told Milanesi that Perrone has no right to say “the elections cannot be held in Libya this year till a constitution is adopted.”
Haftar called Italy an enemy in meeting he held with tribesmen in eastern Libya last week.
According to observers, if Italy did what Haftar asked, then its stance and relations with others cities in west Libya would be affected and weakened.
International Relations and CooperationSecurity Forces
All
2018-09-14
asaeid
Previous Haftar’s son moves millions from Central Bank of Libya
Next UN renews Libya mission, but refuses to endorse election date