Home / Normal / One Year Later, the UN Action Plan for Libya is Dead 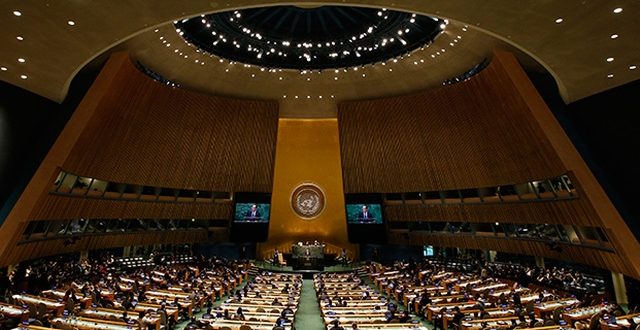 One Year Later, the UN Action Plan for Libya is Dead

In September 2017, on the sidelines of a gathering of global leaders at the UN General Assembly (UNGA), Special Representative of the UN Secretary General to Libya Ghassan Salame presented an “action plan” for Libya that aimed to surmount Libya’s political stalemate and address persistent instability. UN Secretary General Antonio Guterres expressed optimism at the General Assembly regarding the crisis in Libya, calling on all parties to “seize” the moment to move the country forward. However, one year later the situation in Libya is characterized not by progress, but by further deterioration and insecurity.

At the outset, Salame’s action plan was ambitious. The first stage of the plan involved convening political actors from Libya’s major factions, namely the eastern based House of Representatives (HoR) and the High State Council (a consultative body for the western-based and internationally-backed Government of National Accord) to discuss amendments to the 2015 Libyan Political Agreement (LPA). Since the signing of the LPA, the HoR’s refused to ratify the agreement which severely hampered the legitimacy of the Government of National Accord (GNA) and marked a central sticking point in Libya’s political stalemate.

As part of the next component of the plan, Salame envisioned a National Conference, sponsored by the UN Secretary General, that would bring together all key political bodies in Libya as well as marginalized groups to take part in the political process. The key objective of the National Conference would be to foster inclusivity ahead of the final stages of the action plan. It would involve amending and approving a draft constitution before voting on a constitutional referendum; as well as presidential and parliamentary polls.

The National Conference was central to the action plan and meant to serve, in Salame’s words, a “synthesis of the hopes of the Libyan people,” and sought to avoid past mistakes in mediating Libya’s conflict. One of the main criticisms leveled at the political dialogue, that resulted in the LPA, was that it insufficiently represented the Libya people.

In reality, the national conference developed as dozens of consultative meetings and town halls Salame held across Libya with thousands of participants gathered. Feedback from the meetings was meant to inform a report composed of national conclusions and recommendations. In this way, the conference avoided major challenges facing the convening of a huge forum, including security and perceptions of fair representation. Yet it also reflected the persistent difficulty in physically bringing Libyans together in a single national conference in the fractured and insecure environment.

Perhaps the most ambitious aspect of the plan was the assumptions it implicitly made about the international context surrounding Libya. Since 2014, the internal Libyan conflict has been overlaid with the interests of outside actors, in effect making Libya the arena for a proxy battle between several international actors. This reality was highly apparent ahead of the 2017 UNGA.

In July 2017, French President Emmanuel Macron held a summit in Paris that witnessed a meeting between GNA Fayez al Serraj and eastern strongman Khalifa Haftar. The two pledged to work toward a political agreement and future elections, yet Haftar continued to openly criticize the GNA as complicit with terrorist actors. A month later, British Foreign Minister Boris Johnson visited Libya and met with Haftar marking the first visit by a senior Western politician to Benghazi to meet with the strongman. The HoR, backed by Haftar, still refuses to ratify the LPA.

Both of these incidents ahead of the 2017 UNGA demonstrated the extent to which the involvement of international actors in Libya, sought to ensure their own national interests, tangibly impacted developments on the ground in Libya and the local actors’ own calculations in the conflict. The summer 2017 meetings with Haftar elevated his position to that of a legitimate and internationally recognized player in Libya’s conflict. They ensured that Haftar would have a role and likely a say in the future of Libya.

Therefore, while key international players backed Salame’s action plan for Libya, they were also separately pursuing their interests in the country. This practice has continued over the past year and resulted in paralyzing Salame’s plan. In May of this year, Paris hosted another meeting between Serraj and Haftar and announced that presidential and parliamentary elections would take place on December 10, 2018. Although Salame’s vision would culminate in the holding of elections, his action plan did not set a concrete date for elections.

In effect, Paris was seizing control of the international discourse surrounding the future of Libya and presenting itself as the key mediator and negotiator. Italy, meanwhile, has bristled at Macron’s actions on Libya, with Rome expressing emphatic opposition to elections in December due to continued chaos in Libya. The former colonial power is clearly taking unilateral steps to leverage its influence in Libya. In July, Italian Prime Minister Giuseppe Conte announced his country will host its own conference that will look for ways to stabilize Libya. In addition, Italian Foreign Minister Enzo Moavero Milanesi recently held talks with Haftar in Benghazi in an effort to boost ties.

Events over the past year therefore clearly show how Salame’s action plan fell victim – predictably – to the interventions of foreign actors in Libya. If Salame could not corral unity among the international actors involved in Libya in 2017, there is little hope he will be able to do so now, especially given recent turmoil within Libya itself, particularly in the west. Indeed, attempts by external actors over the past year to leverage their own standing in Libya exacerbated internal tensions as local armed groups sought to benefit from lucrative relationships with foreign powers. The situation in Tripoli is evidence that a superficial focus at the international level on national elections comes at the expense of needed efforts to address instability and discord on the ground. The clashes in Tripoli demonstrate that this pattern of appeasing militias while pushing for rushed elections, rather than address the more difficult yet critical issue of disarming Libya’s constellation of armed groups, clearly has a breaking point.

In recent remarks to the UN Security Council on September 5, Salame, laid out UNSMIL’s efforts to address the situation in Tripoli. He rightfully called out the House of Representatives for elevating “their own longevity” over their legislative duties, namely producing legislation for a constitutional referendum and for elections. Salame noted that he has been “exhausting the traditional avenues” to move Libya’s legislative process forward, and that if no progress is seen soon, he will embrace “other ways to achieve political change.”

Yet Salame did not elaborate on what those avenues would be. Moreover, a separate comment in his remarks seemed to augur further destabilization. “When the political process grinds to a halt, some will believe there is opportunity to force change through the barrel of a gun,” Salame said. External actors, in addition to local figures, have been active participants in this phenomenon. But UNSMIL has so far failed to develop a strategy to deal with this perennial fact of Libya’s civil war. Discussions of national unity figure prominently by UNSMIL, while the question of how to deal with local violence and armed groups goes largely unaddressed.

The fundamental problems that undercut Salame’s 2017 action plan remain and are likely to hamper any future UN-led attempts unless those international actors intervening in Libya are brought to heel. In the absence of that condition, which currently seems unlikely, there may be little optimism for yet another new plan for Libya as we head into UNGA 2018.