Home / Normal / Why are refugees being sent back to war-torn Libya? 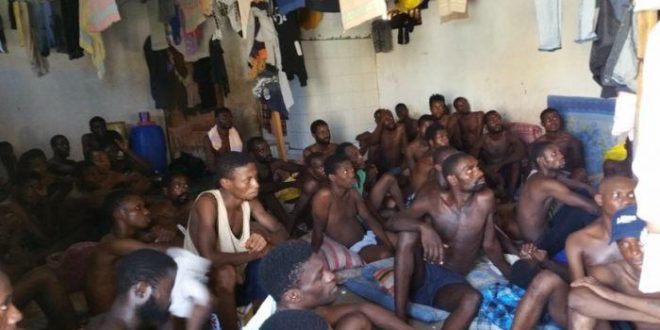 Why are refugees being sent back to war-torn Libya?

Journalist Sally Hayden has for almost three weeks been tweeting a remarkable thread  of her WhatsApp conversations with refugees detained in terrible conditions in Libya. She has included supplemental reporting and audio and video clips from the refugees, and confirmed their stories with sources on the ground.

What has emerged is a darkly compelling, movingly told account of what is happening in one of the most difficult places in the world from which to report.

Many of the people Hayden is in contact with were returned to the country by the EU-backed Libyan coast guard, which intercepted them trying to escape to Italy across the Mediterranean Sea. The refugees and migrants question how EU policy could send them back to a country seeing increased inter-militia conflict and at a time when authorities are struggling for control.

We meet Hayden and a Libya analyst to find out more.

South Korean President Moon Jae-in is almost at the end of a historic three-day trip to Pyongyang for talks with his North Korean counterpart Kim Jong-un. Moon’s visit is only the third for a sitting South Korean president since the division of the Korean Peninsula, and comes as nuclear disarmament negotiations between North Korea and the US have stuttered to a halt. So, is the rapprochement between the neighbours in danger or just getting started? On the last day of the summit, we’ll debrief with two Korean experts.

Where did Western museums get their non-Western artworks from? Do you know? Do most people? And do those institutions tell the truth about it?

Questions such as these prompted Australian art historian Alice Procter to start her “Uncomfortable Art Tours”, during which she takes groups of people around London’s most venerable institutions to tell them the stories behind some of the British capital’s most prized exhibits.

“I started them out of a sense of frustration over the lack of self-awareness that white British people have over their pasts and history – and that lack of attention is part of the shadow of white supremacy and racism that’s hanging over our heads right now,” she told Al Jazeera recently.

Procter’s initiative comes at a time when there is renewed debate over whether European countries should return loot plundered in colonial times. We meet her to check in on that discussion and to find out more about her unusual tours.