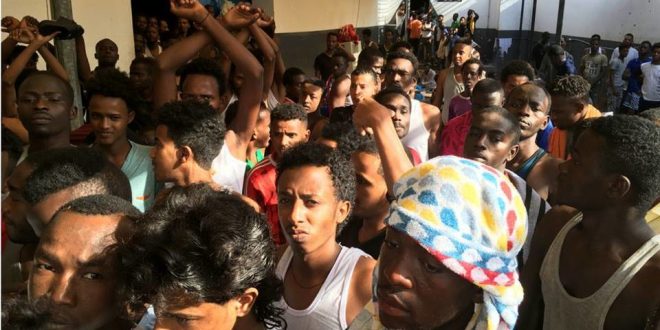 A group of Nigerian migrants held in Libya have been released after a video documenting their detention went viral on social media, AFP has reported.

The migrants, held in the coastal city of Zawiya, filmed the video in July, documenting the poor conditions of their imprisonment and pleading for the Nigerian government to help them.

“We have told them that we want to go back to Africa but they refuse to deport us,” says a man in the video that was shared over WhatsApp and other social networks. “We are suffering here, we are dying here… they are keeping us here for business.”

After the video was sent to a citizen journalism initiative France 24 Observers, reporters alerted the UN’s International Organisation for Migration (IOM) who intervened on their behalf.

“If not for that video we wouldn’t have been able to come back to Nigeria, I believe that,” Efe Onyeka, who shot the video, told reporters. He spent over five months in detentions before the IOM freed him, but watched as fellow detainees died due to their brutal treatment.

The 25-year-old Nigerian entered Libya with the intention of crossing the Mediterranean Sea to get to Europe, where he had dreams of becoming a footballer. After being captured by Libyan authorities, he was held in a migrant prison alongside dozens of others in squalid conditions.

“We were underfed, the water, it was from the latrine,” Onyeka said. “I’m traumatised. I have nightmares about Libya, about the prison. The journey is not worth it.”

Onyeka risked his life by filming the prison and sending out the video. Another man who helped with the filming was nearly beaten to death by the guards.

“They beat all of us,” he recollected, speaking from Nigeria’s Delta state. “They used pipes and sticks, they would not give us food.”

Onyeka is one of some 2,700 migrants who have made it back to Nigeria through IOM’s voluntary return programme this year. Since 2017 close to 10,000 Nigerians have come home.

Last month, the UN criticised Nigeria for failing to tackle migration and human trafficking in the country, a contentious topic in Europe with EU countries looking to stem the migrant flow to the continent.

Despite the threat of violence and expulsion, for many migrants, Libya is a necessary transit point to recover their strength and to save enough money before attempting to continue their journey towards Europe.

Libya’s coast guard has been patrolling the Mediterranean Sea since striking a deal with Italy in February 2017 that empowered Libya to bring migrants back to the country, even though they are at risk of torture and abuse there. The deal, which entailed Italy providing funds and equipment, was an attempt to stem immigration to the country.