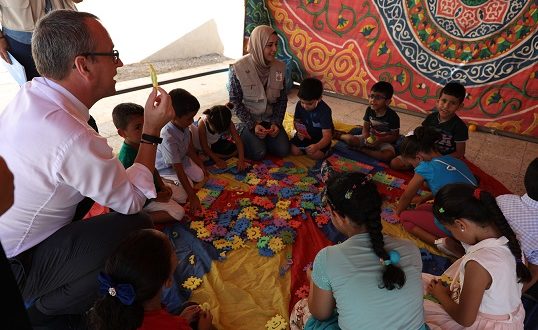 UNICEF: At least 10.000 children got displaced by latest Tripoli violence

Fighting which engulfed the Libyan capital, Tripoli, since August 26, ended on September 26, leaving 117 dead and 581 injured including many children.

At least 5,065 families (25,325 individuals) have been displaced, the majority of whom originate from conflict-affected areas in Southern Tripoli. UNICEF estimates that forty per cent them are children.

While clashes have halted, shortages of food, water and electricity continue to be among the challenges facing children and families. Schools are being used to shelter displaced families, which is likely to delay the start of the school year planned for 3 October.

Amid a measles outbreak, with over 500 cases reported – most are among children – UNICEF is concerned that a lack of functioning health services will result in an increase of the disease.

UNICEF has responded to the needs of the affected population by providing recreational and psychosocial activities through both child friendly spaces and mobile teams. In coordination with local partners in Janzour, Central Tripoli, AinZara and Tajoura, UNICEF has reached 2,053 children, over 20 per cent of the affected children.

For children on the move, transiting through Libya, this violence has added to their suffering. Hundreds of detained refugees and migrants, including children, were forced to move due to the clashes; others remain stranded in centers in dire conditions.

In response to food shortages in detention centers,
UNICEF, together with local partners, has distributed high energy biscuits to 1,500 people including children and pregnant women. Nutrition screenings have also taken place and children in need of additional support referred for further treatment.

To address the needs of migrants and refugees in overcrowded detention centers, UNICEF conducted rapid needs assessments in Taik el Sekka, Janzour and Zintan detention centers. The following WASH response has focused on the emptying of septic tanks, rehabilitation of latrines and the provision of clean and safe water.

UNICEF continues to scale up its emergency preparedness in Libya, pre-positioning the supplies needed to respond to on-set emergencies all over Libya. Funds of around $900,000 are needed to cover the anticipated needs for displacement of families in Tripoli.