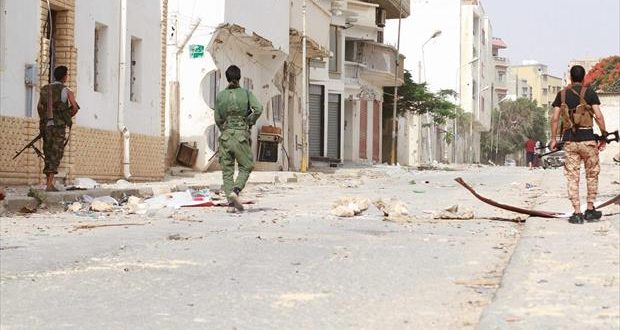 “The daily life of Libyans is just a matter of survival,” says Abdullah. He speaks with a tense voice, as if the fear of being heard never leaves him in the few minutes that the internet connection allows us to talk at the phone.
“You think about your life, the time passing by, and you just hope to spend a day without being kidnapped by militias, or criminal gangs. You must be careful on every street.”

Abdullah, a Libyan resident, waited hours before answering our questions, not because he did not want to, but because – like every day – in Tripoli there was no electricity for at least eight hours.

In recent days, armed clashes between militias have left hundreds killed and injured, while thousands have been displaced. Social media sites have been blocked and in the city, and many believe that it is just a matter of time until there is a total shutdown of internet access.

Meanwhile, Libyans have to cope with the lack of water, of cash, as has been happening for years, and with the fear that the fighting will advance in other areas of the city.

“The militias influence every aspect of Libyan life, they influence the government, they control the banks. They have the last word on access to visas, documents, on the price of money on the black market, the safety of oil wells, ministries, infrastructure. This is Libya today,” he continues.

The militias today are not just the evolution of the brigades who fought the removal of the regime of Muammar Gaddafi in 2011. Rather, they are an expression of the power that determines every aspect of Libyan life.

They have been co-opted in institutions, legitimised by the support of Europeans governments, who could not guarantee the security of the Sarraj government if not supported by the main militias of Tripoli, and de facto “accepted” by the international community.

They are an expression of a widespread, corruptive power that hold together the corridors of power, illicit trafficking, and management of the country’s wealth, gas and oil.

The militias who run legal detention centres under the umbrella of the interior ministry are directly involved in human trafficking, as repeatedly reported by the UN reports. Having them as interlocutors has been – for the European governments – the price to be paid to manage the migration flow, and at the same time the guarantee of impunity and maintenance of a dangerous status quo.

“The militias are able to put their hands everywhere,” continues Abdullah. “For this reason, people remain empty-handed, and there is little and nothing for the investments that the country would need. There are no development strategies, there is just an instinct of survival.”

Since last August, the southern districts of the Libyan capital have been the scene of fighting, after the Seventh brigade, based in Tarhouna, 65 kilometres south of Tripoli, launched an offensive on the city.

The three ceasefire attempts since the violence have been in vain, forcing Prime Minister al-Sarraj to declare a state of emergency to “protect civilians, public and private possessions and vital institutions”.

Solving the issue of the militias has been an open topic in Libya for seven years, since the year of the overthrow of the Gaddafi regime.

Some of the armed groups colliding in recent weeks are among the protagonists of the revolution. In the post-revolutionary boom, the armed groups were financed by the Ministries of Defence and Interior, like the army, under the management of the Supreme Security Committee and of the Libya Shield Forces.

State funds paid wages based on inflated and false statements that enriched the brigade leaders and their political allies. Part of that money was invested in heavy weapons.

After the coup d’état of 2014 and the division of the country, this financing option has failed. Wages have been downsized and without inflated state funds the militia have sought (and found) other ways to finance themselves: rackets, bribes, kidnappings, robberies.

All governments in Libya have failed trying to integrate the militias in state structures. This has allowed them to establish roots leading to the consequent control of the country’s strategic assets, including ports, airports, oil terminals, weapons depots, barracks, bridges and roads, and of course the smuggling of weapons and fuel and human trafficking.

The two governments contend for strategic alliances with the militias. Libya is a country broken in two; east and west, which are separated not only geographically, but increasingly under the economical point of view. Each has its own central bank, the oil company and above all, each with an area of ​​European influence.

Italy is a strong supporter of the UN-backed Government of National Accord (GNA) led by Prime Minister Fayez al-Sarraj, created in 2015 in hopes of easing the chaos that followed the 2011 NATO-backed revolution which ousted Gaddafi.

The GNA is opposed by a rival administration in the country’s east led by military strongman Khalifa Haftar.

Italy and France have both been keen to progress peace efforts in the country which has seen rival militias compete for authority and oil wealth amid a worsening migrant crisis, leading to fertile ground for militant groups.

“It does not matter if Haftar organised these clashes, whoever organised them now does not control the militias anymore. The situation is out of hand because there are too many groups in the field who want their own piece,” comments one Libyan citizen.

UN policies and Western governments have contributed to the current situation in Tripoli. They encouraged the Sarraj presidency to move to Tripoli under the protection of the militia, thus “supporting” the expansion of these groups.

The actors out of this agreement have built alliances to take their share of Libyan wealth.

The international community has strongly condemned the fighting, calling for an immediate cessation of hostilities. United States, France, Italy and Britain have warned that “those who tamper with the security of Libya will be held responsible for these actions.”

But for the Libyan citizens, these are just empty words.

“Not only empty,” says Yaseen, who once worked as a security officer for international companies in Libya, “they are also hypocritical.

“These countries and the United Nations that should guarantee a peace process in Libya have failed. They have done everything wrong in these years. They have imposed a government that represents nothing but their own interests and who make agreements with the very militias they pretend to condemn,” Yaseen adds.