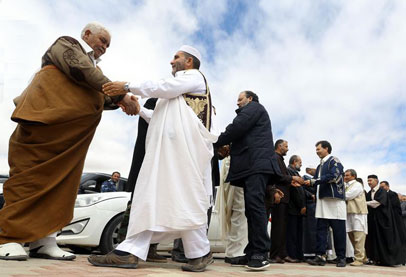 In September, Libya’s capital Tripoli was the scene of violent clashes between rival militias that killed 96 people and injured 306 others. The clashes pitted forces from the 7th Brigade against a coalition of armed brigades in Tripoli, which include the Tripoli Revolutionaries Brigade and the Deterrent and Intervention Joint Force of Abu Salim.

The 7th Brigade, which is mainly made up of Tarhuna tribal men, announced its affiliation with the Government of National Accord (GNA), even though the head of the GNA’s Presidential Council denied this affiliation. The brigade’s main goal is to put an end to the spread of armed militias in Tripoli.

During the clashes, Libya’s tribes announced their support for the 7th Brigade. During the General Gathering of Libyan Cities and Tribes held in the city of Tarhuna Sept. 15 , the tribes expressed their intention to eliminate armed militias and expel them from Libya, specifically from Tripoli.

The clashes came to an end Sept. 26 when a cease-fire was signed by the rival militias. However, Libyans remain concerned that such events would recur in light of the presence of armed militias and in the absence of security and stability in the country.

On Sept. 24, Al-Monitor interviewed over the phone Mawlay Qudeidi, head of the Supreme Council of the Tuareg Tribes, who represents the Tuareg tribe based in southern Libya. Around 150,000 people in the south belong to the tribe, as well as 100,000 who live across different regions of Libya. The Tuareg tribe controls the southern borders with Algeria and western Niger.

During the interview, Qudeidi talked about the situation in southern Libya, plagued by chaos and where armed militias and foreign fighters are spread, as well as illegal immigration. The interview also focused on the tribes’ stance regarding the recent clashes in Tripoli and the reaction of these tribes in case new clashes recur.

The text of the interview follows:

Al-Monitor:  What is the position of the Libyan tribes in general and the Tuareg in particular in regard to the clashes in Tripoli that ended with a cease-fire?

Qudeidi:  The clashes in Tripoli between armed militias are a matter of concern to all Libyans irrespective of their different backgrounds and not just those living in the city. Tripoli at the end of the day is Libya’s capital, so as Libyan tribes, especially as Tuareg, we value all efforts being made in order to spare Libyans more instability. Maintaining stability in Libya starts with stability in Tripoli.

Al-Monitor:  During the General Gathering of Libyan Cities and Tribes held on Sept. 15, you announced several steps like disbanding militias. You also gave a period of three days for that to happen, yet as soon as that period was over clashes broke out again — before they later ended. In case clashes return, will tribes have a military role in countering those militias?

Qudeidi:  Speaking on behalf of the Tuareg, I could tell you that most Libyans are against militias, and this is why tribes have called for disbanding militias and confiscating their weapons. Yet it is not for tribes to play a military role. Tribes primarily have a social role in most regions, which is far from being of military nature.

Al-Monitor:  Do tribes in Libya have the power to resolve the Libyan crisis and disband militias?

Everyone should know that the issue of militias concerns all Libyans, not just one tribe. Libyans must unite against militias present in all of Libya, and specifically in Tripoli. The international community must be held accountable for the crisis because of its involvement in the events on Feb. 11, 2011, and its participation in toppling the regime of former President Moammar Gadhafi are what got Libya to where it is today. After the crisis escalated and civil war started, the international community has reduced its intervention. In other words, they are managing the crisis, but they do not want to solve it.

Al-Monitor:  Why did the tribes express during the Sept. 15 General Gathering of Libyan Cities and Tribes their support to the 7th Brigade whose spokesman, Saad Hamali, had announced their affiliation with the GNA and whose forces fought armed militias in Tripoli in order to disband them?

Qudeidi:  Actually, the Tuareg sent a group of representatives to participate in that gathering. I believe that the support to the 7th Brigade resulted from learning about the details of its motives, history and battle goals. This is a very sensitive battle, and one cannot support any side without running enough background checks.

Al-Monitor:  What role does the Supreme Council of the Tuareg Tribes have in re-establishing security in the south?

Qudeidi:  No one is denying the extent to which the south is suffering from lack of security. The different governments and armies in Libya have failed to impose authority and establish security in the south. This is why tribal social components in the south play a major role in unifying positions. The Tuareg tribe has been communicating with the tribes of the south and its cities so that the south has one unified position. We will therefore be holding several meetings with tribes of the south to solve different crises, especially the security issue. We will suggest that tribes take on security and replace the government in providing security given the absence of official efforts in the south.

Al-Monitor:  The south is suffering from the presence of foreign mercenaries. How will the tribes contribute to solving this crisis?

Qudeidi:  We confirm that there are armed forces from Chadian, Sudanese and other rebel groups in the south of Libya. Members of Libyan tribes are suffering from the presence of such mercenaries who commit crimes such as kidnapping, theft and robbery. At first we thought that some tribes are supporting them, so we got in touch with those tribes that denied controlling such forces and giving them any support. Those mercenaries do not need any tribal support because they have heavy weapons and target all southern tribes. As tribes, we do not play any role in fighting such groups. This is the government’s responsibility, but, in reality, we do not see any governmental efforts to drive those groups out of the south. Once they are out, stability would be restored. Tribes of the south are meeting in order to discuss any solutions for this crisis.

Al-Monitor:  One of the issues faced by Tuareg members is the fact that they do not have identity cards. What is the base of this crisis and how is the council dealing with it?

Qudeidi:  It is true that 17,000 Tuareg families do not have identity cards, and since 2011, all procedures have been taken to submit papers proving their identity and their being of Libyan descent in order to grant them nationality. Yet governments have repeatedly delayed solving this issue. We do not understand the cause of this stalling, but it confirms the sentiment that the Tuareg tribe is being targeted because of fears of its potentially strong political representation.

The Supreme Council of the Tuareg Tribes has been fighting for this right. We have taken all measures, resorted to different official instances and formed a group to meet with Aguila Saleh Issa, president of the Libyan House of Representatives, in April 2015. We explained the problem to him, and he promised to solve it. We also submitted a memorandum to Issa detailing the issue, but we haven’t heard from him yet.

Al-Monitor:  The south has been witnessing inconsistent positions from different political and military elements in Libya like the GNA based in Tripoli, the Interim Government in Bayda, the House of Representatives based in Tobruk and the Libyan National Army under Gen. Khalifa Hifter. What is the position of the Tuareg tribes on these entities?

Qudeidi:  Libya has many political and military entities, but they do not treat us as Libyans with rights. Our requests and services are ignored and we are marginalized on different levels, namely when it comes to lack of services in the south. This is why the Tuareg formed a group to meet with the representatives of these entities like the GNA, the Interim Government and Gen. Khalifa Hifter. We will disclose our position on each entity after meeting with them.

Al-Monitor:  The Libyan south is considered as a main gate for illegal immigration to Europe and neighboring countries. How would you answer such accusations against the tribes of the south and their participation in aggravating and feeding this crisis?

Qudeidi:  First, the accused is innocent until proven guilty. Whoever believes this to be true only needs to share evidence implicating the tribes in illegal immigration. We do not deny that the south is witnessing such a crisis and in great numbers due to the fact that the border is not secured. No one is controlling the border and the bodies that have it as their responsibility are not doing their job, so we now have mercenaries controlling the border and facilitating illegal immigration. Unemployment might have pushed a small number of the Tuareg people and other tribal members to work in illegal immigration. Their economic situation leaves them with a choice between illicit work and death. To protect Libya from the dangers of illegal immigration in the south, the government must provide security and social services.

Al-Monitor:  Does the Supreme Council of the Tuareg Tribes intend to play a role in the reconciliation between the tribes in the south?

Qudeidi:  This is certain. Tuareg tribes do not have a problem with any other tribe or city. They are qualified to play a key role in the reconciliation in the south. We have formed a delegation to meet with all tribes in the south to achieve reconciliation and form a body uniting the south. The delegation will meet with all Libyan tribes to unite their stances and regain their role in Libya to participate in solving the Libyan crisis.

Al-Monitor:  What is the take of the Tuareg tribes on the elections announced by the UN mission? Do they consider the elections and political solutions a way to detente in the Libyan crisis?

Qudeidi:  We are now convinced that the war between Libyans will not bear fruit, but will shed more blood and force thousands to migrate and flee their homeland for fear of bullets. We realize the elections will settle the conflict with the authority, and everyone should accept this solution. As Tuareg tribes, we announced our participation in the elections and welcomed them as a solution to the Libyan crisis. But we still have a problem, which is that 17,000 families from the Tuareg tribe cannot vote because they do not have identity cards. The goal is to dismiss them from the electoral process because their high numbers would affect the results. We hope the crisis will be solved and these citizens will participate in the elections.