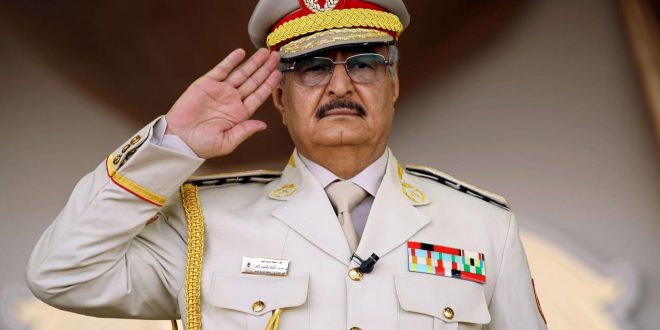 Khalifa Hafter, in his role as General Commander of the predominantly eastern-based Libyan National Army (LNA) launched military operation Murzuq Basin to “eliminate gangs, terrorist and criminals, that have been kidnapping and robbing in the south of the country”.

The operation will be launched in coordination with the operations of the central military areas, Sebha, Brak Al-Shati, Ubari, Ghat, Murzuq and Kufra.

Meanwhile, in Tripoli today, Presidency Council member Ahmed Kajman said that today’s Cabinet meeting concentrated on the crisis in the south of Libya.

Speaking at a press conference in Tripoli and flanked by a number of ministers, Kajman said that a committee on the security and military component for the south was approved at the meeting with the Minister of Interior, Fathi Bashagha, the Minister Finance, and the Undersecretary of Defence, in addition to a representative of the General Intelligence Services.

Kajman said that what is happening in the south is very dangerous with the presence of criminal gangs that violate Libyan sovereignty, threaten national security and engage in armed robbery.

He praised the efforts by the armed military formations (militias) and their supporting forces to deter the gangs in the Umm al-Aranib and Tisma area.

He stressed the need to be resolute in confronting these gangs from both the Chadian opposition and the Sudanese Justice and Equality forces.

Kajaman revealed that there were financial allocations approved by Cabinet for security and military arrangements for the regions of the south.

The activity by the coastal powers related to the south of Libya comes on the back of an explosion of criminality in the south due to its huge security vacuum. Most of this criminality is attributed to Chadian and Sudanese opposition militias.

Fed up with their plight and having given up on any real long-term help arriving from the distracted Libyan coastal powers, on 16 September locals from Sokna, Fugha, Brak and Wadi al-Buwanis with the Khalid Bin Walid brigade gathered and launched an attack on the Chadian militias.

It is not clear how and if the Libyan coastal forces can help the south in the long run.

Both sides of the Libyan political divide have sent forces to the south and Hafter’s Air Force have carried out numerous air strikes over the years in the south.

However, their reaction to the south has been reactive firefighting, and only when Tripolitania and Barqa/Cyrenaica have not been distracted by their own crises up north.

For example, as was the case while Hafter’s LNA was predominantly occupied in its war in Derna and Tripoli while it was preoccupied with its south Tripoli militia fighting.

Their preoccupation and overstretched forces has left a huge security vacuum in the south which has been exploited by Chadian and Sudanese opposition militias.

Militias, ironically, that had previously been hired by the two coastal political camps in their war against one another.

The fact that Hafter is the one sending forces to the aid of the south does not reflect well on Tripoli whose immediate response is to create a committee.

It does not reflect positively on Faiez Serraj – the only internationally recognized executive authority in Libya – as Defence Minister and Supreme Commander of the western-based armed forces.

This is especially so on the back of this month’s Cairo Libyan army reunification talks and the talks’ leaked draft agreement purporting to appoint Hafter as the General Commander of the newly reunited Libyan national army.