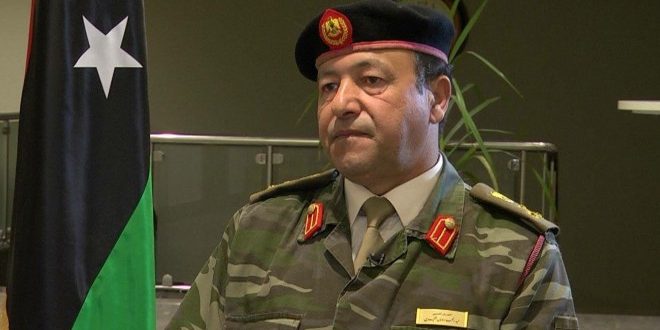 Military official: We reject any initiative to unify Libya’s army with Haftar included

Al-Ganidi told reporters on Thursday that the rejection is based on the leaked information that says “the retired colonel and dual citizen as well as war captive” would be heading the Libyan army, besides the fact that the meetings were held in Egypt which is “an enemy to Libyans and supporter for Haftar and his militias in their crimes in Benghazi and elsewhere – like the crime of Al-Abyar where 36 persons were slaughtered.”

He also said that countries like Egypt, UAE, and Saudi Arabia which support militias cannot help form a Libyan military institution, citing UAE’s aircraft that take off from Khadim airbase in Marj town to strike civilians in Derna without Libyan authorities’ knowledge.

“Initiatives to unify the military institutions must come from inside Libya. We met in Misrata two years ago and several officials came even from eastern Libya to come up with an agreement on the matter but the Presidential Council hindered it and so did Fayez Al-Sirraj by disallowing a meeting in Mittiga and Misrata airbases.” He explained.

He also indicated that they need a Libyan National Army that is concerned with securing the country’s borders and respects peaceful power circulation as February 17 revolution days, rejecting any discussions that involve Khaifa Haftar and his militias.