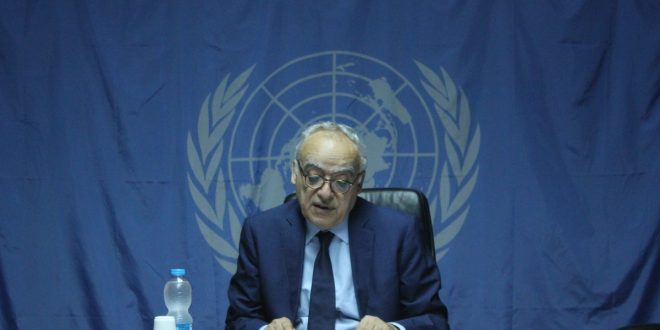 United Nations (UN) Envoy to Libya Ghassan Salame on Wednesday warned that the UN would impose sanctions on those obstructing the implementation of the newly-approved security arrangements in the Libyan capital Tripoli.

Salame made his remarks during a meeting with Libya’s UN-backed Prime Minister Fayez Serraj, and the Security Arrangements Committee (SAC) in Tripoli.

“Salame commended SAC on achievements, called for GNA (Government of National Accord) swift implementation and pledged UN and international community support, warning sanctions against obstructers. Tripoli home to one third Libyans must be protected by regular forces,” the Mission said in a statement later on Wednesday.

Tripoli witnessed weeks of violence between forces allied with the government and other armed groups in Tripoli in August, which caused hundreds of casualties.

The spate of violent clashes ended after rival parties reached a cease-fire agreement, which required the warring parties not to attack public or private properties and refrain from inciting violence.

The ceasefire deal also stipulates that a joint military force will be formed to secure southern Tripoli, and that the withdrawal of armed groups from conflict areas should be overseen by tribal mediators.