Home / Normal / Bensouda calls for bringing Gaddafi before the ICC 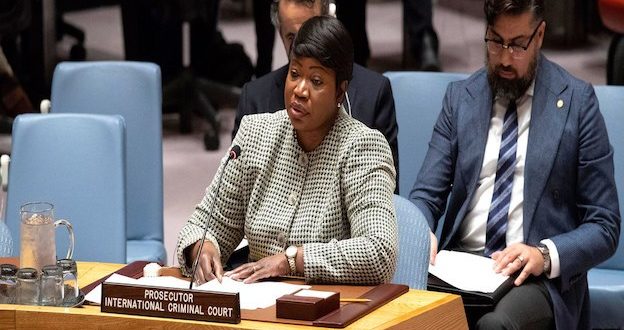 Bensouda calls for bringing Gaddafi before the ICC

The Chief Prosecutor for the International Criminal Court (ICC), Fatou Bensouda, said, on Friday, that her office maintains that the son of the last dictator in Libya, Saif Al-Islam Gaddafi, must be arrested and surrendered to the ICC.

In her statement to the Security Council talking about the situation in Libya, Bensouda said that “in the international warrant that issued by the ICC in June 2011 Gaddafi is accused of playing a key role in planning the suppression of civilian demonstrations by any means, including lethal force, against his father’s regime.”

Bensouda stated that Saif Al-Islam “is just one of several individuals in Libya whose alleged criminal acts could fall within the jurisdiction of the ICC.”

She said that the ICC rejected Saif Al-Islam’s argument when he said that he could not be tried at the ICC because of the ongoing domestic proceedings conducted against him in Libya.”

Bensouda talked about the armed groups by saying that “these armed groups represent a major threat to long-term peace and stability in Libya. We do not confine our investigations to any one group; we look at alleged Rome Statute crimes committed by actors across the territory of Libya, these alleged crimes include killings, sexual violence, torture and enslavement.”

She added that her office continues to make “considerable progress” in the Libyan situation but admitted that “not one suspect” has so far been surrendered to the ICC.