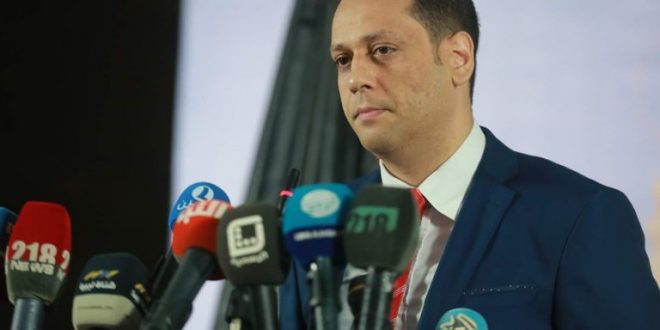 Mohamed El-Sallak, the official spokesperson for Faiez Serraj, the head of Libya’s internationally-recognized Presidency Council and Government of National Accord (PC/GNA), said that Serraj welcomed the Security Council’s 5 November session during which it reaffirmed its strong commitment to the sovereignty, independence, territorial integrity and national unity of Libya.

El-Sallak was speaking during today’s weekly press conference held at the Media Center of the Prime Minister’s office in Tripoli.

Serraj also welcomed the UN Security Council’s readiness to consider reviewing the provisions of the arms embargo, where appropriate, and urged Member States to assist the internatonally-recognized PC/GNA, at its request, by providing it with all necessary security and capacity-building assistance to address the threats to the security of Libya, foremost among them the threat of regulation extremist and other groups associated with those entities.

The November 12-13 Palermo conference on Libya

On the two-day Palermo conference on Libya starting on Monday 12 November, El-Sallak said that Serraj confirmed that the participation of the Presidential Council delegation at the conference was in support of international and domestic efforts to reach a comprehensive solution to end the Libyan crisis, and that Serraj looked forward to the positive participation of all parties.

Serraj thanked Italy and the rest of the international community for their constructive efforts in pushing Libya’s  political process forward, but at the same time called on all parties to hold the next meeting inside Libya, El-Sallak said.

The South of Libya

El-Sallak confirmed that preparations of the government delegation, which is mandated by Serraj to go to the south of Libya, are continuing.

The delegation has been put together in an effort to impose some law and order in the south of Libya.

El-Sallak said there was a series of intensive meetings with service institutions, dignitaries, security and military agencies to develop a comprehensive plan to address the situation in the southern region in terms of security and service.

Regarding the recent events in the city of Sabrata, El-Sallak confirmed that Serraj was following-up on security conditions in the city, explaining that he has instructed the Commander of the Western Military Region to address any attempt to disturb the security and stability of the city.

El-Sallak said that Serraj also appreciated the efforts of the Sabrata Military Operations Room in imposing security and confronting outlaws, while stressing the statement by UNSMIL on the Sabrata fighting in which it warned that those on the international sanctions list are under strict monitoring.

With regard to the visit to Misrata, El-Sallak said that during his visit to the city, Serraj and the accompanying delegation met with representatives of all the services, security and military institutions, dignitaries, dignitaries and NGOs.

El-Sallak said that Serraj held fruitful discussions on various issues, headed by the security file, the national reconciliation file, and other vital files and ways to solve them. El-Sallak said that this visit comes as part of the PC’s efforts to look into the needs of all of Libya’s cities.

El-Sallak failed to mention the ill-treatment received by members of the media by Serraj’s security personnel during the visit.