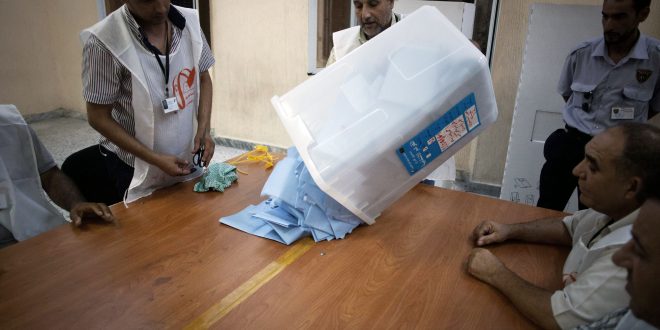 Polling station officials count ballots at a polling station in Tripoli, Libya, Saturday, July 7, 2012. Jubilant Libyans chose a new parliament Saturday in their first nationwide vote in decades, but violence and protests in the restive east underscored the challenges ahead as the oil-rich North African nation struggles to restore stability after the ouster of longtime dictator Moammar Gadhafi. (AP Photo/Manu Brabo)

Italy’s Foreign Minister Enzo Moavero said on Wednesday that Libya could hold elections next spring, just days after the country’s warring factions met at a two-day conference in the EU member state.
On Tuesday, Libya’s two rival governments met in Sicily and its prime minister endorsed a UN plan for an election next year.It was the first time in more tha five months that leaders from the rival Tripoli-based Government of National Accord (GNA) and an eastern administration backed by military strongman Khalifa Haftar met.A prior UN plan for 10 December elections, which France had endorsed but Italy opposed, was scrapped last week.

Italy, a former colonial power in Libya, is the latest country that is seeking to bring the North African nation’s disparate factions together after a Paris summit in May saw the GNA and Haftar agree to hold December polls.

Analysts had worried the Italy summit risked being compromised not only by tensions between Libyan factions but also the competing agendas of foreign powers.

For Rome’s populist government, a top priority is stemming the flow of migrants who exploit Libya’s security vacuum in their quest to reach European shores, often via Italy.

UN envoy Ghassan Salame told the Security Council on Thursday that a national conference in early 2019 would be organised to provide “a platform” for Libyans to spell out their vision for the future.

But diplomatic wrangling between Italy and France also hung over this summit.

The Italian swipes came as Tripoli was plagued by militia clashes that killed at least 117 people and wounded more than 400 between late August and late September.

Salame’s deputy Stephanie Williams on Monday hailed the GNA’s moves to secure Tripoli since then but said more must be done to “generate regular forces ready to assume security responsibilities in the capital”.

According to diplomats and analysts, Russia, France, Egypt and the UAE support Haftar, while Turkey and Qatar have thrown their weight behind rivals to the eastern strongman, especially Islamist groups.