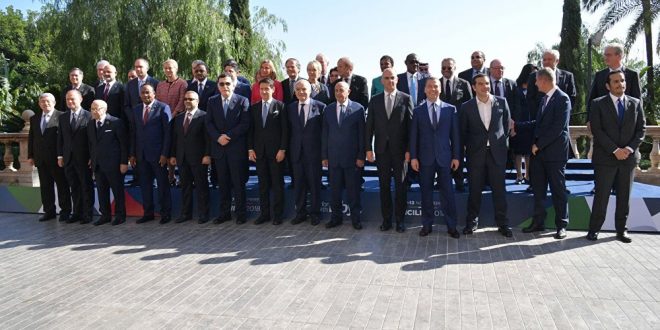 The international conference on Libya held by Italy in its Sicilian city of Palermo came to an end yesterday without any major breakthrough.

The concluding two-and-a-half page statement was overwhelmingly a re-statement of the contents of the long-established UNSMIL and Paris conference principles.

However, Palermo put a final end to the Paris conference’s December 2018 election hopes.

It stressed that only political rather than a military solution is viable in Libya, while reaffirming the LPA framework and UNSMIL Action Plan.

More prominence was given to that Action Plan’s National Conference (Multaqa) to be held early 2019, with a commitment to implementing its outcomes.

The conclusions stressed the National Conference was not a new body replacing existing LPA bodies.

There was also a commitment to passing the electoral law and permanent constitution- with elections now pushed back to the second quarter of 2019.

The conclusions committed to the unification of all of Libya’s state institutions including its armed forces.

There was also an offer to help rebuild Libya’s regular security forces.

Here is Italy’s official concluding statement on the conference:

“On November 12-13, 2018, Libya and International partners met in Palermo, under the auspices of the United Nations and in the wake of the Paris Conference of May 29, 2018. Participants welcomed the meeting in Palermo as a useful platform to show the unity of the international community in supporting the Libyan-owned stabilization process.
They acknowledged Sicily as a crossroad of different cultures and as a symbol of the common engagement in reaching out to the southern Mediterranean and to Libya.

Welcomed the statements by all Libyan delegations and the SRSG Ghassan Salamé, and highlighted the following principles and commitments.

Participants, welcomed the commitment by the Libyan delegations to:

Participants, welcomed the Libyan commitment to:

Participants recalled that any solution to the Libyan crisis can only be a peaceful and political one, in full respect of Libyan sovereignty and a national reconciliation process involving all Libyans who are willing to participate and peacefully contribute to the Libyan transition.

Electoral ProcessInternational Relations and CooperationPolitical Transition
All
2018-11-14
asaeid
Previous Russia says it’s in constant contact with Saif Gaddafi for the stability of Libya
Next Libya could hold elections in springtime: Italy’s FM