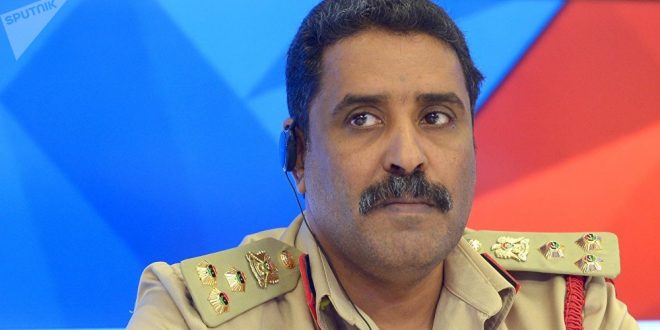 The spokesman of the Libyan self-styled army Ahmed Al-Mismari said Khalifa Haftar is going to remain in his post as “General Commander of the Libyan army” till elections.

Al-Mismari indicated on Wednesday that the only recognizable Supreme Commander of the Libyan army is going to be the elected president.

He added that the general command of the self-styled army is trying to consolidate democracy and statehood.

He also called on Egypt to continue to tackle the issues of the unification of Libya’s military institutions.

This is also contradiction by the self-styled army as Haftar was made a General Commander by Saleh, whom Al-Mismari said is not recognizable as only elected presidents are to be appointed Supreme Commander.

On the other hand, Al-Mismari said Green Mountain (Jabal Al-Akhdar) Court in eastern Libya delivered 68 verdicts for terrorist suspects, adding that one was sentenced to death, two were jailed and 65 others were exonerated.

He did not give more details about the trials and the names of the suspects.

Hundreds of Libyans, including captives from the fighting between 2014 and 2018, are imprisoned by Haftar’s forces in east-based jails such as Gernada.