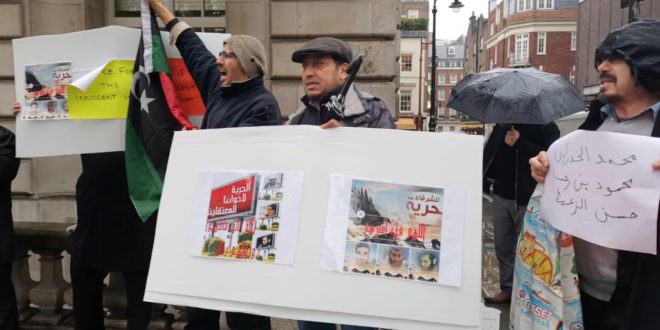 Libyan activists held a stand outside the Saudi embassy in London on Tuesday, to demand the release of three Libyans who were detained at Jeddah airport last year after performing Umrah.

The protesters voiced their concern about the fate of the detainees, especially after the assassination of Saudi journalist Jamal Khashoggi, raising banners demanding Saudi Arabia to clarify the fate of the three Libyans.

The Saudi authorities arrested the three Libyans in June 2017 on charges of terrorism without presenting any evidence and without due process of law.

The protesters expressed concern that the three detainees might have faced the same fate as Khashoggi, especially since the Saudi authorities have not provided any information about them since their arrest at Jeddah airport about a year ago.