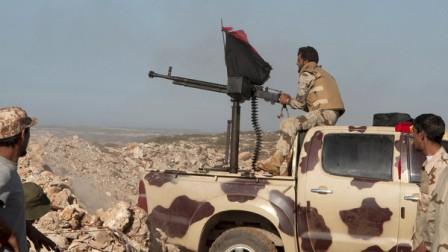 Members of the Libyan pro-government forces, aim a weapon during their deployment in the Lamluda area, southwest of the city of Derna , Libya June 16, 2015. Picture taken June 16, 2015. REUTERS/Stringer

A Libyan militia leader has compared himself to George Washington, America’s first President, describing him as a “militia guy” who led the free world.

According to the Middle East Eye, Salah Badi, who was sanctioned earlier this month by the US Treasury, said that only fighting will put pressure on parties in Libya to end their war.

His comments have drawn sarcastic reactions in Libya’s political and social circles.

“We gave them an opportunity and the UN didn’t play its role so I think the war is a manner of pressure on them,” Badi said.

The Treasury has said that Badi played a critical role in battles in 2014 that nearly destroyed Tripoli’s main international airport and forced many people from their homes.

It also accused his militia forces of using highly destructive Grad rockets in densely populated areas in the latest round of fighting in the capital Tripoli in September.

Under the Treasury’s sanctions, US persons are generally barred from transactions with Badi and any property he may own in the United States is blocked.

In his remarks, Badi accused the head of the Libyan Government of National Accord Fayez al-Sarraj of “only acting like the mayor of Tripoli as his decisions can’t reach other areas.”

“The eastern part of Libya, the south and other western parts of Libya are not following his decisions,” he said.

“Sarraj and others don’t have a history of struggling for freedom against (former leader Moammar) Gaddafi, even when the revolution had started,” Badi added.