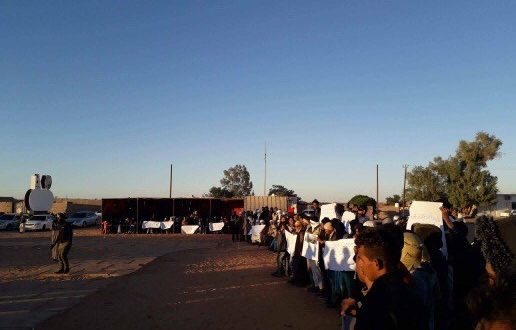 Members of the Tuareg community gathered in Ubari town in southwestern Libya to condemn in the strongest terms the airstrike conducted by US Africa Command (AFRICOM) near Awaynat town last Thursday, which killed 11 people; AFRICOM claimed they were al-Qaeda militants.

The protesters accused AFRICOM of killing 11 innocent people under the pretext of terrorism and without any evidence substantiating their guilt, denouncing what they described the defamation and the media disinformation campaign against the martyrs of the “horrific Awaynat massacre,” in reference to those killed in the airstrike.

Banners were raised against AFRICOM, accusing it of killing innocent people on charges of terrorism and rejecting the killing and exterminating of Tuareg “via phone calls”.

The protesters called on the Attorney-General and the Interior Ministry to open an investigation into the attack to determine the facts and circumstances.

In a statement issued during the stand, the tribe members demanded in the name of the persons entitled to claim retaliation and in the name of Tuareg Tribe elders and dignitaries, the Presidential Council, the House of Representatives, and the High Council of State to open an impartial international and local investigation in what they called the “Awaynat massacre” in no more than 48 hours, warning to step up their protest if their demands were not met.

The also called on local and international human rights organizations to take a similar step.
Tuareg elders demanded AFRICOM to apologize and admit that the airstrike was wrong, holding the PC, Ghat Security Room, and Tassili Battalion responsible for the death of the innocent people killed in the incident.

The statement insisted that the victims included civilians and military personnel, among them, was a field commander in Al-Bunyan Al-Marsous, who fought terrorism in Sirte to offer his country security and stability.

“The motorcade that was bombed was on its way to rescue a group of Tuareg, near the Algerian border, who were encountering a smuggling gang attempting to smuggle heavy machinery to Algeria,” the statement read.

AFRICOM confirmed earlier that it, in coordination with the UN-backed Government of National Accord (GNA), conducted a precision airstrike on November 29 against Qaeda militants, killing 11 people and destroying three vehicles, near the Awaynat area in southwestern Libya.