Home / Normal / MSF: Migrants forced to disembark in Libya are still at risk 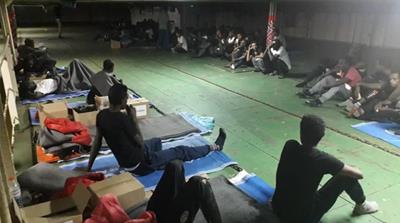 MSF: Migrants forced to disembark in Libya are still at risk

More than 90 people rescued in the central Mediterranean Sea last month by the merchant ship Nivin are still being held in Libya after they were forcibly removed from the ship by Libyan security forces in Misrata. This assault underscores the increasingly harsh treatment of migrants, refugees, and asylum seekers attempting to reach Europe.

Many of those rescued refused to disembark voluntarily, as they feared for their safety in Libya, where they had been held previously. During a 10-day standoff with Libyan security forces in mid-November, teams from Doctors Without Borders/Médecins Sans Frontières (MSF) carried out more than 90 medical consultations onboard the Nivin, treating chemical burns caused by a mixture of spilled fuel and seawater, skin infections, and generalized pain.

On November 20, Libyan security forces stormed the ship and forcibly removed everyone on board. MSF was not allowed to access the port area on that day. “We saw ambulances leaving the port area in a hurry, but the exact number of people wounded is unclear,” said Julien Raickman, head of mission in Libya. “Our information indicates that at least four people ended up in hospital with bullet wounds, suggesting a violent assault…. Authorities reported using rubber bullets only, [but] even rubber bullets can inflict serious wounds when fired at close range.”

Many of the individuals removed from the ship are now in official Libyan detention centers, in police custody, or in other similar facilities, while others are still in medical centers. MSF teams have very little information about their current situation and are not authorized to see them or provide medical care, including to follow up with those MSF treated on the Nivin. Some rescued individuals are reportedly facing prosecution for alleged acts of piracy.

The letter calls on the UN to do more to protect refugees and migrants trapped in Libya, while scaling up existing evacuation mechanisms outside the country.