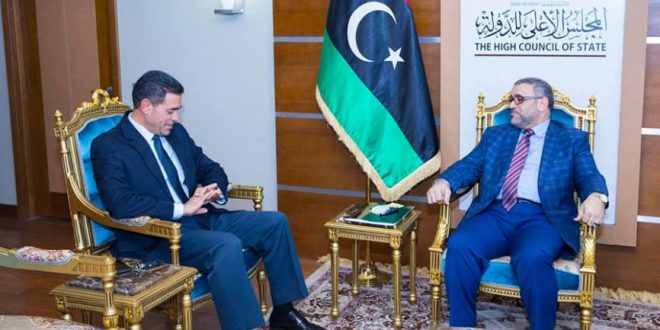 The head of the High Council of state (HCS) Khaled al-Mishri, informed Wednesday, the Libyan High National Election Commission (HNEC) the HCS’s rejection of the tenth and eleventh amendments approved by the House of Representatives (HoR) on the constitutional declaration.

“The meeting held at the HCS’s HQ was devoted to clarifying the HCS’s position on the referendum law, and the amendments of the HoR to the constitutional declaration, which is plagued by many legal flaws”, the Information Office of the HCS stated.

Al-MIshri has stated earlier that the Constitutional amendments made by the HoR are plagued by several legal irregularities, considering that the referendum law adopted by the HoR is contrary to the political agreement.

Electoral ProcessLegislationPolitical Transition
All
2018-12-13
asaeid
Previous 1,800 police to be trained in rehabilitated centres
Next Germany pledges 2.5 million euros to stabilization in Libya