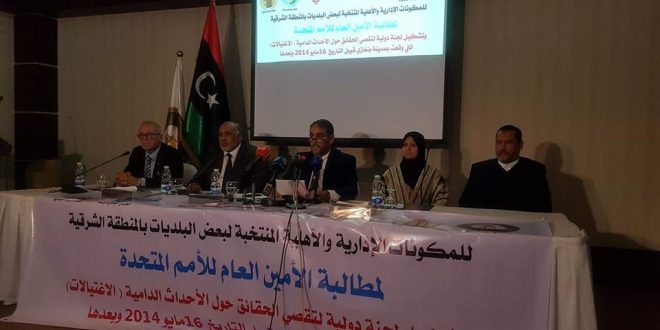 Municipalities from eastern Libya and members of the Benghazi Association held on Tuesday in Tripoli a press conference to call on the United Nations to take action regarding the crimes committed in Benghazi before the kickoff of Dignity Operation in 2014 and afterwards.

The representatives of the municipalities and the association urged the UN Secretary General to form an international committee to go to Benghazi and inspect “the bloody crimes” that took place in the city right before the start of Dignity Operation in 2014 and the months after it.

“The incidents that took place in Benghazi under the alleged fighting of terrorism led to the displacement of thousands of families from Benghazi and even from Derna and Ajdabiya.” The representatives said in a letter sent to the UN Secretary General.

They also added that the war in Benghazi and in Derna killed thousands of youths and injured thousands others, leaving behind orphans and widows as well as destroyed houses and buildings as well as public properties and infrastructure.

Khalifa Haftar launched Dignity Operation in May 2014 under the claim that he was fighting terrorists – opponents to his authoritarian ruling and attempts to carry a military coup on democracy and civil state – leaving Benghazi in ruin in both infrastructure and social fabric.