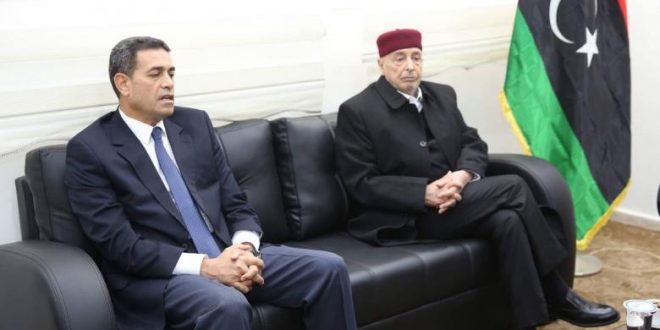 The Chairman of the High National Elections Commission (HNEC) Emad Al-Sayeh met in Tobruk with the Speaker of the House of Representatives (HoR) Aqilah Saleh and discussed the preparations of the constitution referendum.

Al-Sayeh told Saleh that the HNEC had finished 90% of the preparations for the referendum, awaiting the provision of 40 million dinars by the Presidential Council to finalize the project and take to the public.

“We’ll be opening voter registration for about two weeks very soon. Our systems are very accurate and secure and have no hacking or forgery whatsoever as they are monitored by international agencies. The day of the referendum will be set in consultation with the HoR.” Al-Sayeh said.

He also confirmed that the HNEC had finished logistics’ works for the referendum, the referendum ID cards and had selected 20 countries where Libyans can vote abroad.

On December 26, Saleh urged the HNEC to speed up its work regarding the referendum after its law was approved by the HoR on November 28.

Several members from the Constitutions Drafting Assembly, HoR and the High Council of State appealed at the Supreme Court the constitutional amendment lately endorsed by the HoR giving immunity to the referendum law.