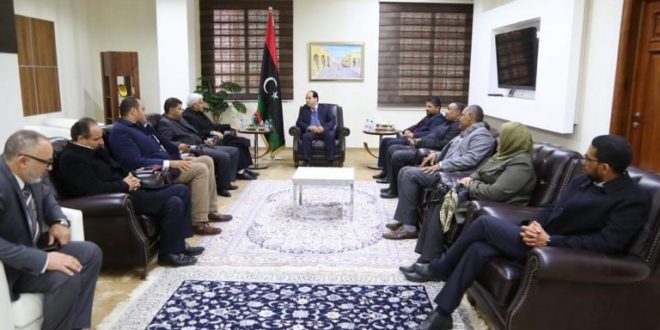 Divisions within Libya’s Presidency Council (PC) were further exposed by the Deputy head of the PC Ahmed Maetig on Wednesday.

During a meeting in Tripoli with the Masar (Pathway) bloc of House of Representatives (HoR) members, Maetig appealed to them to pressure the head of the PC and Government of National Accord (GNA), Faiez Serraj, to respect the terms of the Libyan Political Agreement (LPA).

The terms of the LPA, signed in the Moroccan city of Skhirat in December 2015 and which gave birth to the PC/GNA, stipulate that PC decisions are to be taken by consensus.

Indeed, article 1:3 of the LPA states that:

There is no doubt that the PC has not been operating by consensus for years. As early as the first year of its creation than the split between Tripoli, Zintan and eastern Libya was exposed through a series of boycotts.

It is ironic that Maetig was appealing to the HoR for support when the relationship between the two bodies has been conflictual. It is true that the Masar HoR bloc is more aligned with the PC, but Maetig will need the support of the majority of the HoR to be able to bring pressure to bear on Serraj.

The conflict brings a new dynamic to Libya’s political equation beyond the traditional Tripoli versus the HoR.

Maetig is hoping to forge an alliance against Serraj by offering the HoR more influence in Tripoli, and more money and projects in the east.

In return he hopes the HoR will fully recognize the GNA. The HoR recognizes the PC but has refused to endorse the GNA, and hence the GNA prime minister and his ministers are officially refered to as Prime Minister or Minister-designate.

Serraj and Mishri were politically pushed into each other’s arms when like-minded members of the HoR and HSC agreed -well within the rules of the LPA – to reform the PC. In response, Serraj reshuffled his government to counter their move.

Ironically, the appointment by Serraj of Fathi Bashagha from Misrata as Interior Minister was thought to strengthen Maetig, another Misratan. It was presumed that Maetig had an input in the decision.

The new open split within the PC cannot be viewed positively by UNSMIL and the international community at large with a referendum and elections planned.

He said it had not been presented to other PC members for approval and therefore violated the LPA. He said that the appointment was therefore invalid.

The nine-member PC is already effectively down to five members. Ali Gatrani and Omar Aswad stopped participating almost from the start, Musa Koni resigned in January 2017 and Fathi Majbri has stopped attending although he remains a member.

The split within the PC has strengthened the calls for its restructuring by Abdulsalam Nassiya, the chairman of the HoR’s dialogue committee. He has seized on the PC divisions, saying that they strengthen the need to restructure the PC.

He has taken the lead in negotiating with the HSC an amendment to the LPA which would see the nine-member PC reduced to a three-member presidency with a separate prime minister heading the government.

The HoR and the HSC have approved the change, but it is extremely unlikely to happen. It is thought that Ghassan Salamé is opposed to a change, as is Haftar and, of course, Sarraj.

Ultimately, the spat, could undermine Sarraj’s credibility in international eyes if officials start refusing to implement his orders.  His credibility in Libyan eyes is already seriously damaged. Even so, UNSMIL will continue to work with him, as it has no one else to work with.

This leaves the ball firmly in the hands of the bloc of HoR and HSC members who want to restructure the PC. If they can command a majority within their respective chambers, the LPA gives full and clear power to do so.

If they can unite, UNSMIL and the international community would find it difficult to oppose them – at least openly.

But things are never that simple in Libyan politics with a multiplicity of dynamics at play.

It must be recalled that the political dynamics of the referendum on the permanent constitution, the national conference (Multaqa) and general elections are all at play.