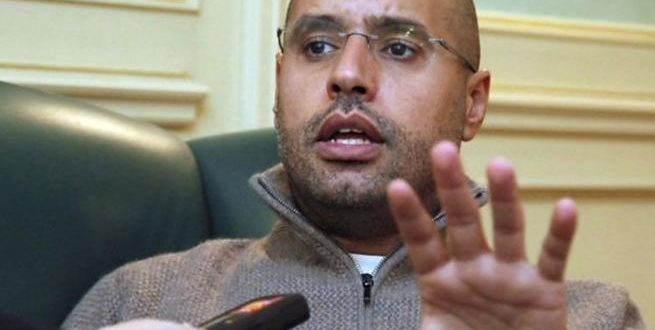 Weeks earlier, Saif Islam Gaddafi’s team sent a letter to the Russian president and a top foreign policy official asking them to support the established road map for Libyan reconciliation and all citizens’ involvement in the settlement process. However the letter didn’t specify candidates that intend to run for the presidency.

Saif Islam Gaddafi, the son of former Libyan leader Muammar Gaddafi, who was toppled as a result of NATO’s involvement in the country’s domestic crisis in 2011, backs holding a presidential vote in the state as soon as possible, “as any delay creates more problems”, his representative stated responding with criticism to a UN envoy’s proposal to set up elections only by the end of 2019, Bloomberg reported.

“The only solution is elections: if you maintain the current political situation that is not in the Libyan people’s interests”, Saif Islam’s aide was quoted by the edition as saying.

Although a recent summit on internal Libyan policies, hosted by Italy this past autumn, set a target of holding elections in the first half of 2019, the UN ambassador to Libya Ghassan Salame remarked later that the presidential election may not happen any time soon as it is necessary to hold parliamentary elections first and then a referendum on the constitution, which should precede the much-anticipated presidential vote.

Late last year, Saif Islam Gaddafi sent a letter to Russian President Vladimir Putin via Russian Deputy Foreign Minister Mikhail Bogdanov, in which he addressed the road map for the settlement of the Libyan standoff and national reconciliation, but did not mention his intention to run in the Libyan presidential election, Muhammad Qailushia, a member of Saif Islam Gaddafi’s political team, told Sputnik, adding that Gaddafi, who was released in 2017 after a trial in the wake of the 2011 revolt, would make a decision independently on whether or not to run for presidency.

The remarks came right after Bogdanov’s statement regarding Russia’s willingness and preparedness to support all the political forces in the country without exception wanting to partake in the Libyan elections. He told Sputnik that no one would be deprived of the right to run for Libyan president, and that Saif Islam Gaddafi and his supporters should be a part of the nation’s political process.

The fractured country of Libya has been lingering in a state of turmoil since the overthrow and killing of Muammar Gaddafi in a 2011 NATO-backed political revolt. The oil-producing country has been divided into two parts controlled by different governments: the eastern part is governed by the elected local parliament backed by the Libyan National Army, led by Field Marshal Khalifa Haftar, while the western part is controlled by the UN and EU-backed Government of National Accord and led by Tripoli-based Prime Minister Fayez Sarraj. Despite the parties’ initial plan to hold parliamentary and presidential elections in the country in a bid to unify it, they never happened, further adding to the chaos in the country.

Insecurity has also enabled jihadists fleeing Syria and other conflicts to establish strongholds, reportedly including Daesh, a terrorist group banned in Russia and most other countries.