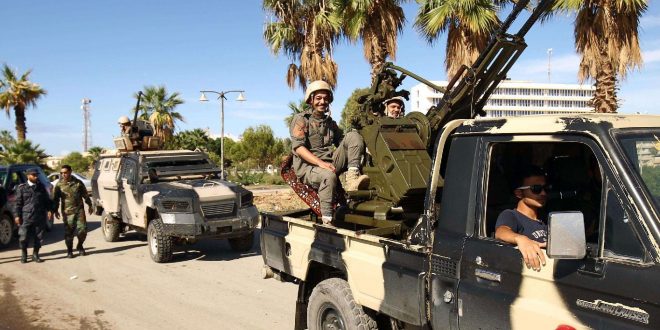 Eastern forces loyal to commander Khalifa Haftar have launched a military operation in southern Libya to secure oil and gas facilities and fight extremists, a spokesman said on Tuesday, a move that may alarm the authorities in Tripoli in the west, Reuters reports.

Haftar, whose powerbase is the eastern city of Benghazi, leads the Libyan National Army (LNA), which controls the east of the North African nation and major oil ports in the region.

“We announce the start of an operation to liberate the south,” LNA spokesman Ahmed Mismari told reporters in Benghazi.

He gave few other details about the initiative, but any advance on oilfields in the south by Haftar’s forces could be opposed by Libya’s internationally recognised administration in Tripoli, which lies in the west of the OPEC nation.

Other military sources told Reuters several LNA units had moved in recent days from Benghazi to Sabha, the biggest city in the south of Libya that lies in the same southwestern region as El Sharara, Libya’s biggest oilfield.

El Sharara, more than 200 km (125 miles) from Sabha, has been closed since December due to a protest by tribesmen and state guards demanding salary payments and development in the area.

It was not immediately clear whether the LNA forces were headed to El Sharara. El Feel oilfield, a smaller production facility in the area, has not been affected by protests.

Haftar has become a major player in Libya since his forces seized Benghazi in 2017, after a three-year battle mainly with Islamist fighters.

Mustafa Sanalla, chairman of the state-owned National Oil Company, has said he would not reopen the 315,000 barrel-per-day (bpd) El Sharara field without a new security arrangement.

He had demanded a change of leadership of the state oil guards, parts of which NOC has previously accused of being behind the field occupation, plus training for the force to make it more professional, and the creation of “Green Zones” within the field to prevent unauthorized access among other measures.

Tripoli-based NOC has struggled to keep national oil production steady because armed groups or tribesmen have often forced the closure of El Sharara and other oilfields.

Libyan output has been hovering around 1 million bpd, well below the 1.6 million bpd produced before the 2011 uprising that toppled Muammar Gaddafi and plunged the nation into chaos.

Security in southern Libya is very poor given its remoteness from the main population centres on the northern coast and the overall breakdown of law and order since 2011. The region has frequently experienced clashes between tribes and armed groups.