Home / Normal / Ministry of Interior, EU and UN lay the cornerstone for the first Model Police Station in Libya 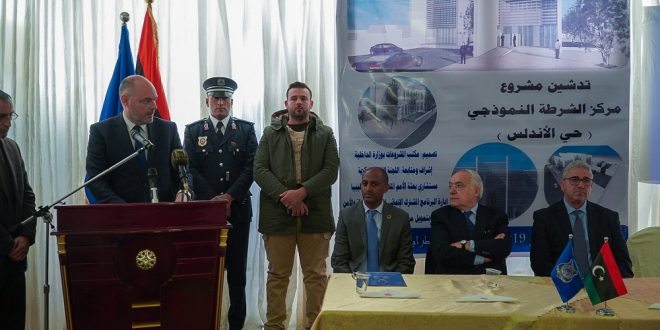 Ministry of Interior, EU and UN lay the cornerstone for the first Model Police Station in Libya

The Ministry of Interior launched Monday the construction works of the first Model Police Station in Libya in a ceremony that took place in Hai al-Andalus in Tripoli. The Hai al-Andalus Police Station was selected to be the vanguard of this project, seeking to strengthen the capacity of Libyan security services, and to integrate good practices in community-oriented, citizen focused policing and police organization management under the jurisdiction of the national government.

The ceremony was chaired by the Minister of Interior, Mr. Fathi Bashagha, accompanied by the Special Representative of Secretary-General for and Head of the UN Support Mission in Libya (UNSMIL), Ghassan Salame along with the European Union (EU) Ambassador to Libya, Mr. Alan Bugeja, and United Nations Development Programme (UNDP) Acting Resident Representative, Mr. Mohammed Salih.

During the ceremony, Minister of Interior Bashagha said, “This project is a result of cooperation between the Ministry of the Interior, the European Union and the United Nations. I hope that similar projects will be implemented in Benghazi and Sebha to provide an appropriate working environment for security personnel and provide better services to citizens.”

The event marks the return of state authority in Tripoli and its police, to combat crime and disorder in partnership with the communities.

Addressing the ceremony, Dr. Salame stated, “This is an exemplary project, for the time has come to turn the page on the differences. Weapons should be only in hands of the unified state, the well-established state, the just state, the able state and the effective state, to defend human rights and the provide security for its citizens. Now is the time.”

The initiative is part of the three-year EU funded programme implemented by UNDP which aim at helping Libyan authorities to protect citizens, provide better services, and create jobs and entrepreneur opportunities.

Ambassador Alan Bugeja, Head of the Delegation of the European Union to Libya, said: “An efficient police force requires not only modern facilities and equipment, but more importantly well-trained police officers being able to carry out their duties effectively. The aim of the project is to deliver on both these aspects as well as strengthen the trust of the local community in the police. The Hai al-Andalus Police Station in Tripoli, once completed, will inspire the establishment of similar police stations around the country. Security is one of the major concerns of Libyans and the European Union, thanks to the substantial involvement of EUBAM and in coordination with UNSMIL’s security sector support to Libya, is pleased to be financing this initiative.”

The concept of the model police station was developed through a series of discussions and workshops organized with Libyan police and Ministry of Interior personnel, in coordination with police technical advisors from UNSMIL, European Union Border Assistance Mission (EUBAM), and the EU Liaison and Planning Cell (EULPC).

“The model police station project is part of a comprehensive process to develop the capacity of rule of law and security institutions in Libya. This is through an inclusive approach to strengthen police capacity and provide better service delivery mechanism to all Libyans,” said UNDP Resident Representative a.i., Mr. Salih in his speech.

The model police station pilot project is intended to increase security in the country through addressing local conflict and strengthening municipal capacities.