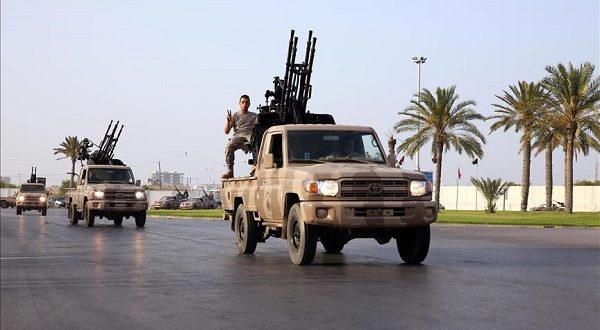 Libya: At least five dead in renewed clashes between rival militias in Tripoli

A new round of clashes between rival militias in Libya’s capital left at least five people dead, the country’s health ministry said, without specifying whether the casualties were civilians or fighters.

The Health Ministry’s Injured Persons’ Affairs Department said on Wednesday that the number of casualties is expected to increase, as fierce clashes in Tripoli are ongoing, the Libya Observer news website reported.

Hours before the fighting reached its peak, the United Nations’ mission in Libya warned against fresh violence in the capital as tensions rose between rival militias despite a September 2018 ceasefire deal.

That agreement had provided a brief respite from deadly clashes in Tripoli, where at least 117 people were killed and hundreds more injured in that last round of violence.

“The United Nations Support Mission in Libya (UNSMIL) strongly condemns the recent military mobilisation of forces in southern Tripoli and is monitoring the situation closely,” the UN said in a statement, warning parties “against any breach of the ceasefire agreement”.

UNSMIL strongly condemns the recent military mobilisation of forces in southern #Tripoli & warns parties against any breach of the ceasefire agreement, compromising stability in the capital & endangering lives of civilians & their properties. https://t.co/cUnkY2wctv pic.twitter.com/QFJg6mizUl

Fierce battles between militias from the capital and other areas in the west of the country rocked Tripoli between the end of August and early September, when the UN-brokered truce deal came into effect.

On Wednesday, witnesses reported sporadic shooting and road closures after the Tripoli Protection Force alliance warned on Facebook it would “repel an attack” by a rival group that had failed to withdraw from the capital.

The Seventh Brigade militia, from the town of Tarhuna, about 60km from the capital, has maintained its positions in Tripoli since the ceasefire agreement.

The UN said that “any party initiating a confrontation will be held fully responsible” and said it “will take action as necessary” to halt any violence.

The main armed groups in Tripoli say they are loyal to the internationally backed Government of National Accord (GNA), but officials have struggled to exert real control over the fighters.

A second administration in the east of Libya is backed by Khalifa Haftar and his self-styled Libyan National Army.

The UN is pushing for elections to help stabilise Libya, but chronic violence has delayed plans for a vote.