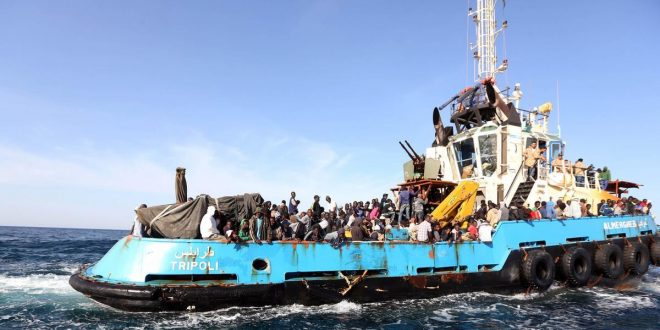 More than 140 refugees and migrants rescued at sea by a cargo ship landed in Libya and were taken to a detention centre, the United Nations said on Tuesday.

“In Libya’s current context, where outbreaks of violence and widespread human rights violations prevail, no rescued refugees and migrants should be returned there,” Charlie Yaxley, spokesman for the UN refugee agency UNHCR, told a briefing.

More than 200 people have already drowned in January and 4,507 have reached Europe by sea despite “bitter cold and great danger”, Yaxley said.

“You save them, as the Libyan coastguard did, and take them back,” Salvini told Mediaset television on Tuesday.

“In that way, people will stop paying human traffickers for a trip that has no future, because it ends in death or with an existence on Italy’s streets.”

Last year, 2,297 people died or went missing in the Mediterranean while 116,959 reached Europe by sea.

According to the International Organization for Migration, sea arrivals to Europe in the first 16 days of 2019 totalled 4,216, compared with 2,365 over the same period in 2018.

The UN said returning people to Libya goes against international law because they risk abuse and torture there.

“Return from international waters to Libya is against international law,” said Vincent Cochetel, a special envoy of UNHCR, on Monday.

European countries have long been at odds about permanent solutions for refugees from Syria, Afghanistan, Eritrea and many other countries trying to reach its shores.

In recent months Spain and Malta agreed to take in some rescued refugees following Italy’s refusal to do so, but often not before long negotiations with other European Union countries.

As a consequence, most humanitarian groups have abandoned sea rescue efforts.