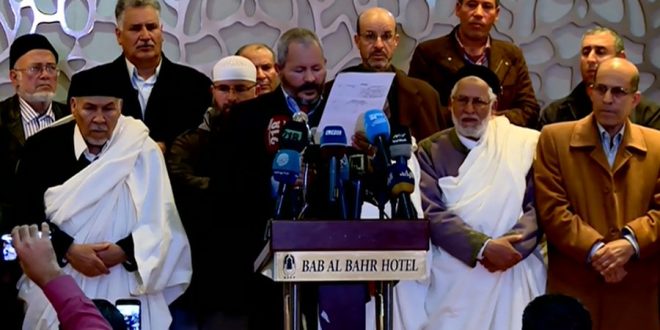 Under the truce, signed in the capital by officials from Tripoli and Tarhuna, fighters from the Tripoli Protection Force and the Seventh Brigade are to withdraw to their respective cities, officials said on Monday, according to AFP.

The deal also envisions a prisoner swap and an exchange of bodies of fighters killed in the clashes.

It was agreed after mediation by officials from the town of Bani Walid, 170 kilometres southeast of the capital.

The head of the UN mission in Libya, Ghassan Salame, called tribal leaders in Bani Walid to thank them for their efforts and said he hoped for “the success and sincere application of the agreement”, the mission said on Twitter.

Fighting between the armed groups erupted last Wednesday despite a truce deal four months ago that had halted deadly battles in the city.

The clashes have left 16 people dead and 65 others wounded, according to the health ministry.

Tripoli was plagued by militia clashes that killed at least 117 people and wounded more than 400 between late August and late September.

The main armed groups in Tripoli say they are loyal to the internationally-backed Government of National Accord (GNA), but officials have struggled to exert real control over the fighters.

A rival administration in the east of Libya is backed by Khalifa Haftar and his self-styled Libyan National Army.

The UN is pushing for elections to help stabilise Libya, but chronic violence has delayed plans for the vote.